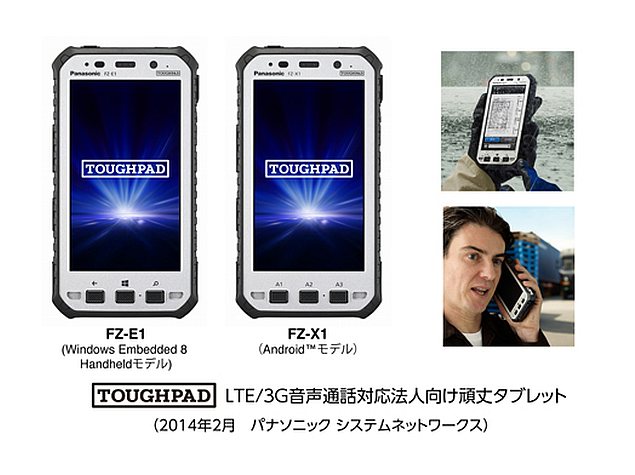 Both the Panasonic Toughpad FZ-E1 and Toughpad FZ-X1 smartphones come with 5-inch LCD displays with a 720x1280 pixel resolution, apart from 2GB of RAM, 32GB of built-in storage and microSD card expandability. Notably, the rugged smartphones weigh as much as many 10-inch tablets, at 430 grams.

Both the Toughpad devices besides sporting a 5-inch display are the said to be the first ones to include 3G and LTE connectivity, according to PC World. The Toughpad FZ-E1 and Toughpad FZ-X1 phablets feature 8-megapixel rear cameras, and 1.3-megapixel front-facing cameras.

It has been additionally noted that the new Toughpad smartphones feature a MIL-STD-810G military rating, and can resist a drop from the height of 3 metres, and be submerged up to 1.5 metres of underwater for up to 30 minutes. The phablets can also work in extreme temperatures, ranging from minus 20 degrees Celsius to 60 degrees Celsius.

The Toughpad FZ-E1 and Toughpad FZ-X1 phablets are both backed up by fast-charging 6200mAh batteries, along with the such connectivity options as Wi-Fi 802.11a/b/g/n/ac, Bluetooth v4.0, Micro-USB, GPS with A-GPS and GLONASS, and NFC.

The firm also launched its Toughpad FZ-M1 tablet at CES 2014. The rugged tablet, unlike previous iterations, is targeted at the enterprise segment. The tablet comes with a 7-inch touchscreen with a resolution of 1200x800 pixels with glove-touch technology and also comes with stylus support (optional).