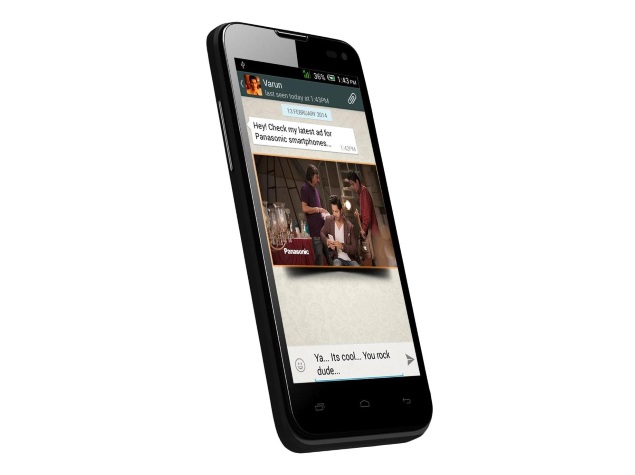 Panasonic T41 is now available via an e-commerce website at Rs. 7,999. So far, no official announcement about the phone has been made by Panasonic.

An established retailer had claimed last week that the new Android 4.4 KitKat-based Panasonic T41 will be announced at a price point of Rs. 7,900. It's worth mentioning that since the T41 has been listed on a third-party online store, one cannot be certain if this will be the official launch price when the smartphone is unveiled in India.

Notably, the Panasonic T41 will be the company's first Android 4.4.2 KitKat smartphone to be launched in India. The new budget smartphone is a dual-SIM (GSM+GSM) device and supports Micro-SIM, instead of the regular SIM, according to the HomeShop18 listing.

It sports a 4.5-inch FWVGA (480x854 pixels) IPS display and is powered by a 1.3GHz quad-core processor (unspecified chipset) alongside 512MB of RAM. The Panasonic T41 sports a 5-megapixel autofocus rear camera with LED flash, while it also houses a 0.3-megapixel front-facing camera.

The Panasonic T41 includes 4GB of inbuilt storage which is further expandable up to 32GB via microSD card. The smartphone is available in Pearl White and Bright Red colour variants only. The smartphone weighs 120 grams.

It packs a 1650mAh battery with no word about talk time and standby time. The T41 smartphone comes with GPRS/ EDGE, 3G, Wi-Fi 802.11 b/g/n, Bluetooth, GPS and Micro-USB connectivity options.