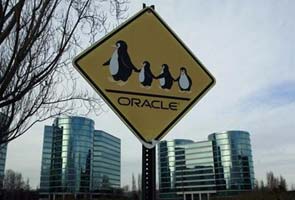 Highlights
A California jury began another round of deliberations on Tuesday in a high profile trial over allegations that Google's Android mobile platform violates Oracle's intellectual property rights.

The jury has already wrestled with Oracle's copyright claims against Google and delivered a partial verdict last week. Now, jurors are mulling Oracle's patent claims, but the potential patent damages appear far less than what is involved in the copyright allegations.

Oracle sued Google in August 2010, saying Android infringes on its intellectual property rights to the Java programming language. Google says it does not violate Oracle's patents and that Oracle cannot copyright certain parts of Java, an "open-source," or publicly available, software language.

The trial in San Francisco federal court has been divided into three phases: copyright liability, patent claims, and damages.

In court on Tuesday, attorneys for both companies made their closing arguments on patents. Oracle attorney Michael Jacobs said it does not matter that Oracle's patents only cover certain small parts of Android.

"You don't avoid infringement because Android is big," Jacobs said, adding that Google's conduct was reckless.

Google attorney Robert Van Nest said the company designed Android from scratch, and that there is no evidence Google encountered the patented technology until Oracle threatened litigation.

"There's not a single document, not an email," Van Nest said.

While Oracle is seeking roughly $1 billion in copyright damages, the patent damages in play are much lower. Before trial, Google offered to pay Oracle roughly $2.8 million in damages on the two patents remaining in the case, covering the period through 2011, according to a filing made jointly by the companies.

During trial, U.S. District Judge William Alsup revealed that Android generated roughly $97.7 million in revenue during the first quarter of 2010.

The jury found last week that Oracle had proven copyright infringement for parts of Java. But the jury could not unanimously agree on whether Google could fairly use that material.

Without a finding against Google on that fair use question, Oracle cannot recover damages on the bulk of its copyright claims. Alsup has not yet decided on several legal questions that could determine how a potential retrial would unfold.