Oppo Teases Use of Lithium, Other Light Metal Elements on N3 Smartphone 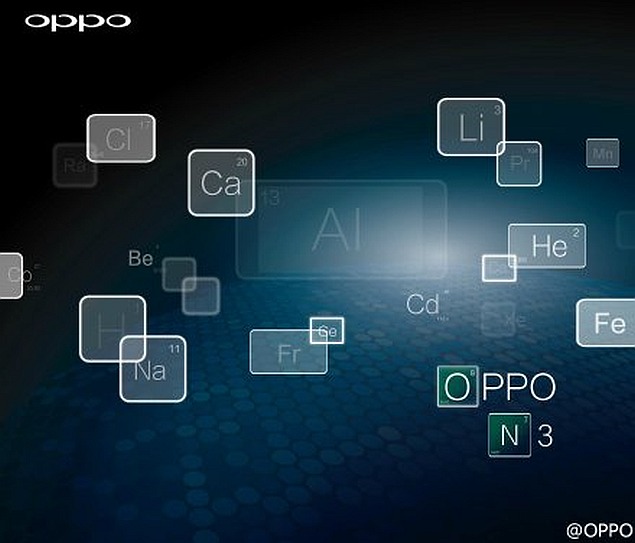 While Oppo on Tuesday teased its mysterious 'aerospace grade material' build in an image, it on Wednesday teased yet another image hinting the presence of Lithium in its rumoured lightweight body.

The blue-coloured teaser image shows the outline of the Oppo N3 along with different element symbols from the periodic table. While aluminium 'Al' is written inside the smartphone on the screen, lithium (Li), sodium (NA) and calcium (Ca) are highlighted outside the handset along with other partially faded element symbols, such as cadmium (Cd), francium (Fr), helium (He), and iron (Fe).

While the image does not confirm which element will be used for the Oppo N3 smartphone, the caption of the image on Oppo's Weibo account asks, "[The lightest metal elements into Oppo N3] Do you know what the world's lightest metal element is it?" We know that's Lithium, which however as an alkali metal is highly reactive and flammable - so Oppo would have to be using an alloy of it to include in the phone. When the metal's unsuitability was mentioned by a Weibo user in the comments, and that Oppo would never include lithium in its Oppo N3, the manufacturer replied "don't be so sure of it."

The Oppo N3 was recently reported to house a new cooling system using a special material. As per the recent reports, the special material covers the vital components of the Oppo N3 and accelerates heat conduction whenever the temperature rises. The full details of how the system works were not provided.

The N3 is set to be officially launched on October 29, and the handset maker last week sent invites for the event in Singapore.