Oppo Reno is set to launch later this month, and ahead of that date, the torrent of leaks refuses to halt. Now, marketing images depicting an alleged Reno-branded smartphone has surfaced online, showing triple rear cameras and clad in a jade green colour. Additionally, another smartphone claimed to be the Oppo Reno Lite has been spotted on TENAA packing dual rear cameras with a 16-megapixel primary sensor, and showing two colour options viz. blue and black. The screen size is listed at 6.5-inch while an octa-core processor paired with up to 6GB of RAM will keep things running.

Starting with the marketing material leak, an image allegedly showing the Oppo Reno has surfaced online showing triple rear cameras. On closer inspection, one can see that one of the sensors is rectangular in shape. This sensor is most likely the periscope camera that will bring the 10x optical zoom feature to life. A similar implementation with a square camera module can be found on the Huawei P30 Pro. The device in question might turn out the be the high-end variant of the Oppo Reno that will reportedly be powered by the Snapdragon 855 SoC. The leaked image comes courtesy of tipster Bang Gogo, who recently tweeted alleged camera samples of the Oppo Reno as well. 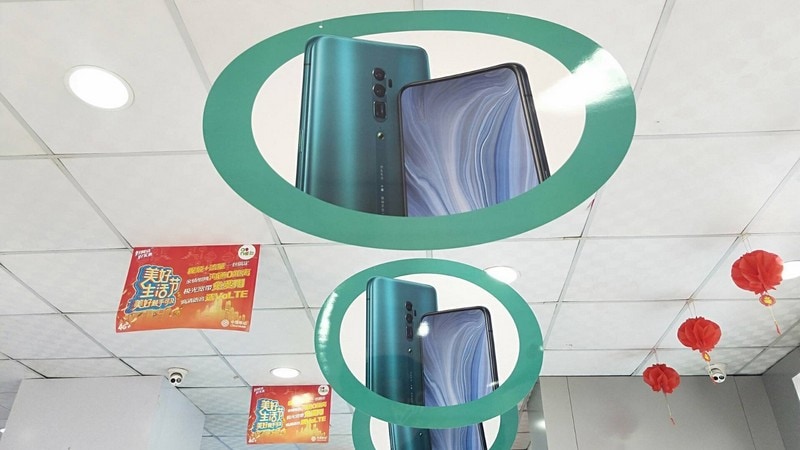 Moreover, another smartphone in the Reno series alleged to be the Oppo Reno Lite has been spotted on TENAA database. Two separate listings for the alleged Blue - PCAM10 and Black - PCAT10 variants of the Oppo Reno Lite are now mentioned on the TENAA database. The images show a rear-mounted fingerprint sensor and will skip on the in-display fingerprint sensor that will reportedly be present on its higher-end siblings. As far as specifications spotted on the TENAA database go, the Oppo Reno Lite will pack a 6.5-inch (1080×2340 pixels) TFT display and will be powered by an octa-core processor clocked at 2.1GHz, however, it has not been specified whether it will be a MediaTek or Qualcomm processor.

As per information mentioned on the TENAA database, the device will come in two variants with 4GB and 6GB of RAM paired with 128GB of internal storage, which can further be expanded up to 256GB via a microSD card. In the imaging department, the alleged Oppo Reno Lite will pack a dual rear camera setup consisting of a primary 16-megapixel camera and a 2-megapixel depth sensor. On the front, a 16-megapixel selfie camera is there to handle selfies. The selfie snapper can be clearly seen housed inside a waterdrop notch, which means the Oppo Reno Lite won't feature the unique one-side elevating pop-up camera that we have seen in the alleged Oppo Reno case renders.

The TENAA listing also mentions the battery capacity of the alleged Oppo Reno Lite (model no. PCAT10) at 3,910mAh, while the dimensions and weight are 162x76.1x8.3 mm and 190 grams respectively. On the software side, the device is listed as running Android Pie. As for the design, the black and blue variant appear to have a glossy rear panel with a gradient texture on the black variant. The Oppo Reno Lite's alleged TENAA listings were spotted by Frandroid.

The Reno series will reportedly consist of a Standard Edition as well, and it was recently spotted on TENAA with codenames PCAT00 and PCAM00 packing dual rear cameras consisting of a 48-megapixel primary sensor and a 5-megapixel sensor, alongside a 16-megapixel front camera housed in a pop-up module. It will reportedly feature a 6.4-inch full-HD+ (1080x2340 pixels) AMOLED display and will pack a 3,680mAh battery with VOOC 3.0 rapid charging support.

As per an alleged visit to AnTuTu, the Oppo Reno will be powered by the Snapdragon 710 SoC paired with 6GB of RAM, while Android Pie will handle things on the software side. We'll get to know more when Oppo launches new smartphones under the Reno sub-brand at an event on April 10 in China.

Further reading: Oppo, Oppo Reno, TENAA
Nadeem Sarwar Email Nadeem Nadeem Sarwar has been writing about technology, smartphones, and gaming for Gadgets 360. He closely follows new launches, leaks, and the latest developments in the world of tech. More
Apple's Clips App Gets Camcorder Filter, Ability to Add Music from GarageBand
The Legend of Zelda: A Link to the Past, Metroid Prime Trilogy, and Persona 5 for Nintendo Switch Leaked