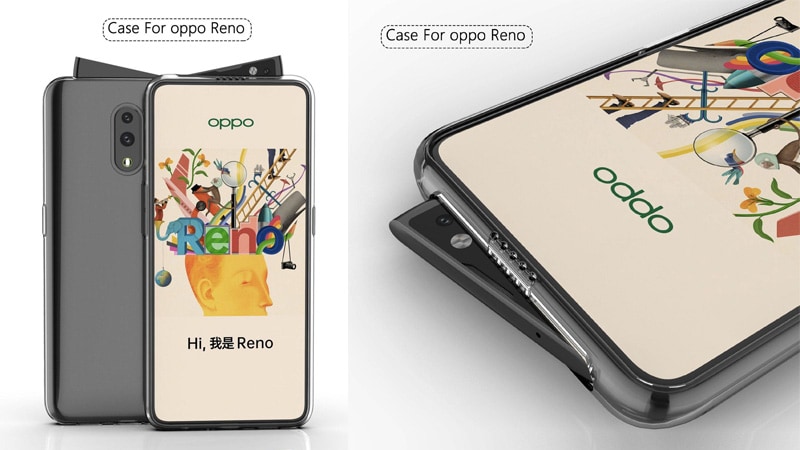 Oppo Reno is back in news. The Chinese smartphone maker has had a hard time keeping its upcoming Reno smartphone under wraps. We have seen multiple leaks around this device in the past, which have revealed colour options, the camera setup, and a lot more about the phone. The Reno's highlight feature is expected to be the 10X zoom but fresh leaks hint at multiple variants of the smartphone with different processors. Separately, an Oppo official revealed the top-end variant of Reno will be powered by Qualcomm's flagship SoC and feature liquid cooling.

Leaked renders of this standard variant reveal a unique pop-up camera module that pops from one side. It houses the selfie camera as well as the selfie flash. The standard variant seems to have a dual camera setup only and Oppo could have reserved the triple camera setup for the Snapdragon 855 powered variant. However, both these variants are rumoured to sport the Sony IMX586 48-megapixel primary camera.

A leaked case render of the standard variant of the Oppo Reno also reveals a 3.5mm headphone jack, USB Type-C port, and a speaker grille on the bottom. The case renders reveal the positioning of the power and the volume buttons but it is not clear if the standard edition will have an in-display fingerprint scanner.

Based on previous leaks, it has already been tipped that the smartphone will be available in Black, Green, Purple and Pink colour options. The Oppo Reno is also said to be capable of 10X hybrid zoom, a technology which it showcased at MWC 2019 and is expected to make its way to this smartphone that is expected launch on April 10.

The Oppo Reno is expected to have a 5G variant with a Snapdragon X50 modem and one without 5G connectivity. It will also have a Lamborghini Edition with 12GB of RAM. With the launch around two weeks away, it'll be interesting to see how much it'll cost and if it'll make its way to India.