Oppo Reno, the new smartphone from the Chinese smartphone maker that is set to debut on April 10, has purportedly surfaced on benchmark portal AnTuTu. The handset listed online features a Qualcomm Snapdragon 710 SoC and packs 6GB of RAM. It also includes a full-HD+ display panel. The new development comes after a couple of alleged TENAA listings of the Oppo Reno had surfaced online. Some case renders showing off the design of the Oppo phone were also leaked recently, indicating a notchless display panel and a triple rear camera setup.

The AnTuTu listing shows an Oppo phone with model number PCAM00. This is notably one of the model numbers that were spotted on Chinese regulator TENAA's website earlier this week.

Among other revelations, the AnTuTu listing shows that the phone achieving an overall score of 166,935. The database also mentions the presence of the Qualcomm Snapdragon 710 SoC, coupled with 6GB of RAM. Further, it highlights that the Oppo model runs Android 9.0 Pie and comes with 256GB of onboard storage.

Coming to the display, the listing notes that the Oppo phone has a full-HD+ (2340x1080 pixels) screen. The display size is yet to be revealed, though. 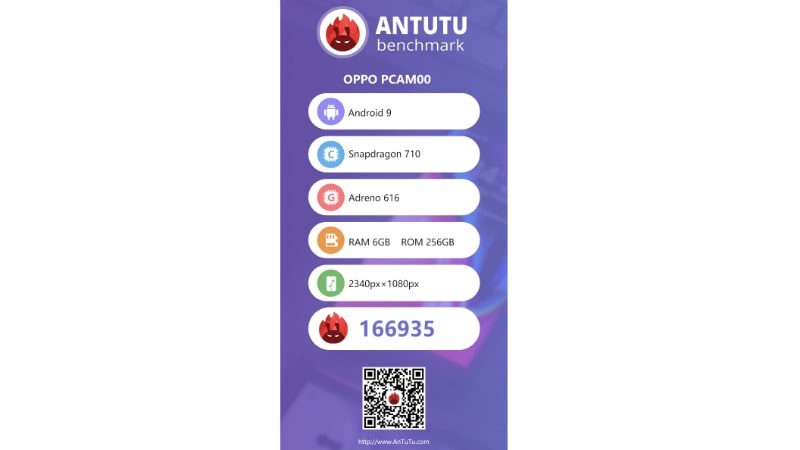 Notably, the specifications featured on the AnTuTu portal are identical to what was seen on the TENAA site recently. Oppo is, however, likely to introduce another Oppo Reno variant with high-end specifications, such as Snapdragon 855 SoC and triple rear camera setup.

Oppo is speculated to offer a 10x hybrid optical zoom on the Reno phone that was showcased last month. The new model could also have a notchless display panel and a vertically-aligned camera setup at the back -- if we believe the case renders leaked earlier. Furthermore, the handset could have a pop-up selfie camera.

Earth Hour: Time, Theme for 2019, and Everything You Need to Know
Daimler Asks EU Antitrust Regulators to Probe Nokia Patents