A tipster has claimed that the Oppo Reno 4 series will be powered by Snapdragon 765G SoC. 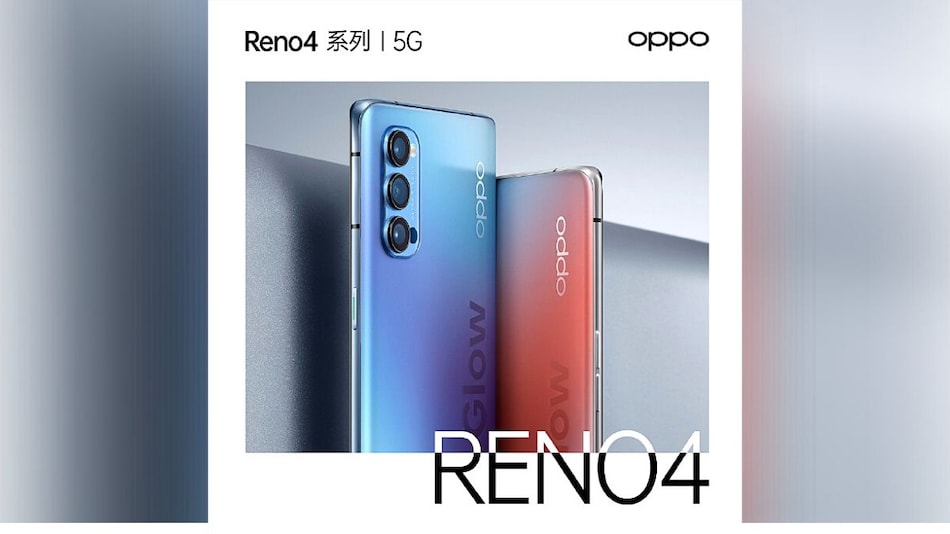 Oppo Reno 4 and Reno 4 Pro phones with 5G connectivity support have been confirmed by Oppo on Weibo. The company on the Chinese micro-blogging site also shared photos of Oppo Reno 4 smartphones where the triple rear camera setup, as well as the two colour options, have been revealed. Meanwhile, a tipster has claimed that Oppo Reno 4 series will be powered by Qualcomm Snapdragon 765G SoC. The tipster has highlighted other key specifications of the smartphones, however, the pricing details were not specified. As the name suggests, Oppo Reno 4 series is the successor of Oppo Reno 3 series that was launched in December 2019.

Oppo in its Weibo post teased the Oppo Reno 4 phones' massive triple rear cameras as well as their two colour options (blue and orange). In a separate post, the Chinese tech company also showcased the shiny blue back panel of the smartphones. Both the posts by Oppo reveal the 'Reno Glow' moniker on the back panel. According to a report by NotebookCheck, Oppo had filed a new trademark - Reno Glow with the European Union Intellectual Property Office (EUIPO) back in April.

Meanwhile, a tipster on Weibo has claimed that the Oppo Reno 4 series will be powered by Qualcomm Snapdragon 765G SoC and will pack a 4,000mAh battery with 65W fast charging support.

The tipster has also indicated that the Oppo Reno 4 will feature a 6.43-inch display and weigh 183 grams.

For selfies and video calling, Reno 4 phone is said to carry a 32-megapixel front camera. The triple rear camera setup is rumoured to include a 48-megapixel main camera, an 8-megapixel secondary camera, and a 2-megapixel tertiary camera. The phone will reportedly come with 8GB of RAM along with 128GB and 256GB storage options.

The triple rear camera setup on Oppo Reno 4 is said to include 48-megapixel main camera with optical image stabilisation support, a 12-megapixel secondary camera, and a 13-megapixel tertiary camera. The phone will be reportedly offered in 8GB + 128GB and 12GB + 256GB storage options. Lastly, the tipster has claimed that the phone will weigh 172 grams.

The aforementioned specifications should be taken with a pinch of salt as Oppo has not confirmed these details. The launch date of the Reno 4 series is also yet to be revealed. To recall, Oppo launched the Oppo Reno 3 series in December 2019. The phones carry quad rear cameras and the vanilla Oppo Reno 3 is powered by MediaTek Helio P90 SoC while the Oppo Reno 3 Pro packs a MediaTek Helio P95 SoC.