Oppo R17 Pro is likely to be the superior version of the R17 that debuted earlier this week.

Oppo R17 Pro may be the Chinese industry's answer to the variable aperture camera first featured on the Samsung Galaxy S9 family. The new smartphone by Oppo, which notably comes just a day after the Oppo R17 emerged officially, is touted to debut with a Smart Aperture technology that will enable users to capture dynamic lighting by adjusting the aperture sizes. It is separately reported that the Oppo R17 Pro could come with a triple camera setup. Huawei already adopted the technology to offer as many as three rear-facing camera sensors with the launch of the P20 Pro back in March. Oppo might use a similar technology on the Oppo R17 Pro. Meanwhile, the benchmark scores of the upcoming smartphone also emerged with a Snapdragon 710 SoC. This is unlike the Oppo R17 that debuted on Monday with a Snapdragon 670 SoC.

As teased in a video posted on Weibo, Oppo is set to bring the R17 Pro with a variable aperture feature that it calls Smart Aperture. The handset, as detailed in the video, will have two f-stop numbers, particularly f/1.5 and f/2.4, that will interchange through the software to adjust the amount of lighting and ultimately enhance shots. While the concept of variable aperture is not new in the market of still cameras and DSLRs, Samsung adopted this development first on the Galaxy S9 and Galaxy S9+ and calls it Dual Aperture. The same technology has also been inherited by the Galaxy Note 9.

Alongside the variable aperture, the Oppo R17 Pro will have a bunch of artificial intelligence (AI) powered camera features, including a Super Night Mode. GizmoChina also reports that leaked marketing material by Oppo is doing the rounds of the Internet, and has hinted at the availability of a triple camera setup on the Oppo R17 Pro. It is unclear that how the Chinese company will leverage the addition of the third sensor that sits in line with the two sensors on the R17 Pro, as seen in the alleged marketing material. 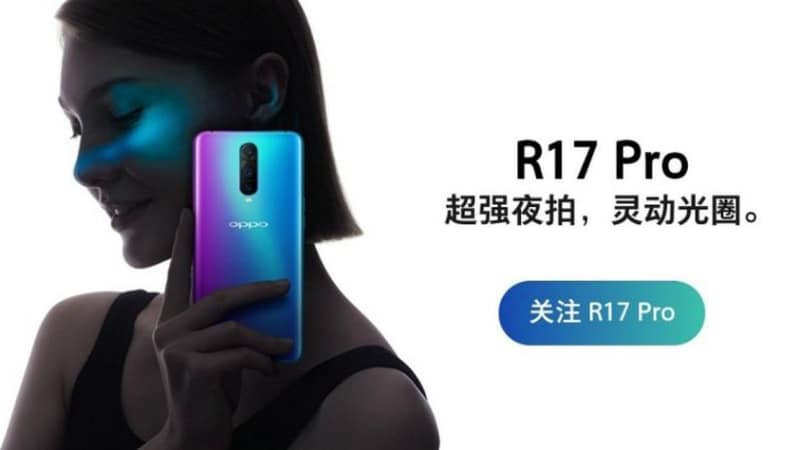 In addition to the all-new camera setup, the Oppo R17 Pro is likely to come with a Snapdragon 710 SoC. As spotted by Telefoonabonnement.nl, a Geekbench listing has tipped the availability of the new chipset. The listing also highlighted that the smartphone has 8GB of RAM.

If we believe some ongoing rumours, the Oppo R17 Pro features a 6.4-inch display and come with 128GB of onboard storage. The handset is also reported to run Android 8.1 Oreo-based ColorOS 5.2 and pack a 3,500mAh battery.

Oppo hasn't revealed any details about the launch of the R17 Pro. However, the company has already listed the Oppo R17 and is set to start taking its pre-orders in China from August 18.

Further reading: Oppo R17 Pro, Oppo
Jagmeet Singh Email Jagmeet Jagmeet Singh writes about consumer technology for Gadgets 360, out of New Delhi. Jagmeet is a senior reporter for Gadgets 360, and has frequently written about apps, computer security, Internet services, and telecom developments. Jagmeet is available on Twitter at @JagmeetS13 or Email at jagmeets@ndtv.com. Please send in your leads and tips. More
BSNL Postpaid Add-on Plans Offer Up to 30GB of Data per Month