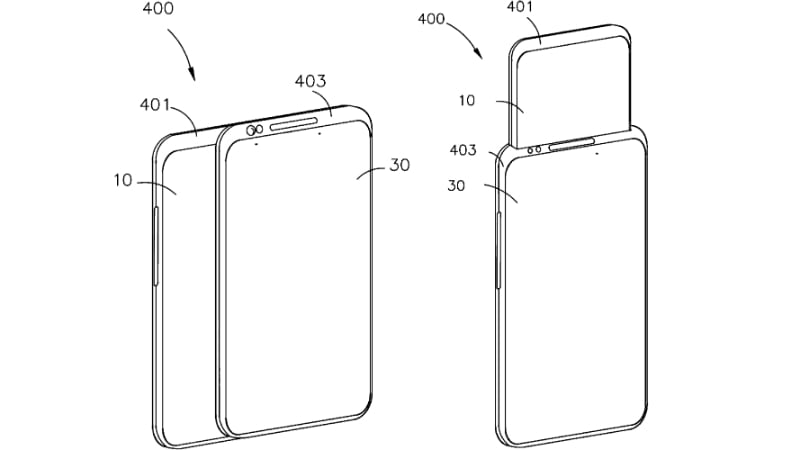 Oppo last year brought the Find X with a camera slider. And now, a patent application has emerged online that shows new Oppo phones with pop-up and side-slider designs. The new models appear to have a sliding system to bring a second display panel. This is unlike the Find X that was limited to bring the camera module through its slider mechanism. The concept also looks similar to how Vivo has adopted a pop-up selfie camera design in the recent past.

LetsGoDigital reports that Oppo on January 29 had a patent published with the World Intellectual Property Organisation (WIPO) for smartphones having two displays along with pop-up and side-slider designs. A foldable form-factor was also seen in one of the images. Notably, the patent was applied for back in April 2018.

The system, if we believe what has been provided on the images, works similar to how the pop-up selfie camera of the Vivo V15 Pro crops up from the top panel. There would be a primary screen that will hold the secondary panel.

It is unclear but interesting to see that how Oppo would use the pop-up display. Maybe, the secondary panel could be used to display notifications.

The second type of smartphone model that's reportedly in the pipeline by Oppo is a side-slider handset. It may use the secondary screen as a keyboard or for playing games.

A couple of renders also suggest that the mysterious Oppo phones would have a narrow bezel to host the front-facing camera, earpiece, and other necessary components. Notably, the images don't show any notches or punch-hole placements.

Oppo hasn't officially confirmed the presence of its slider smartphones. However, the Chinese company is currently busy preparing the launch of the Oppo Reno that is set for April 10. The company also, as we mentioned, has a good record of bringing distinctions, such as the camera slider featuring Find X and affordable in-display fingerprint sensor sporting Oppo K1. Moreover, a foldable Oppo phone prototype with a design similar to the Huawei Mate X was showed off earlier this year.