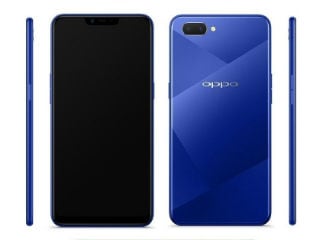 Chinese manufacturer Oppo appears set to launch a mid-range smartphone in the market. A new handset allegedly called Oppo A5 has been spotted on the Internet, along with specifications and images. According to the latest leak, the Oppo A5 appears similar to the Oppo A3 and the Realme 1 smartphones. The key highlight of the smartphone is the presence of a display notch on a 6.2-inch screen. Under the hood, the smartphone packs a Qualcomm Snapdragon 450 processor paired with 4GB of RAM. Meanwhile, the leaked renders show the Oppo A5 in all its glory.

As per a report by Chinese site MTKSJ, spotted by Slashleaks, the press renders of the alleged Oppo A5 showcase the smartphone from all sides. The post also contains some of the specifications of the upcoming handset. As mentioned, the smartphone will supposedly sport a 6.2-inch display with 19:9 aspect ratio and a notch similar to the Oppo A3. However, it has a lower HD+ resolution of 720x1520 pixels, compared to the full-HD+ resolution of the Oppo A3. Additionally, it will be powered by an octa-core processor clocked at 1.8GHz, that is the Snapdragon 450 SoC. It is equipped with 4GB of RAM and 64GB of inbuilt storage.

In terms of optics, the leaked details show that the Oppo A5 will feature a dual camera setup on its back, with a 13-megapixel sensor and a 2-megapixel sensor. There is no fingerprint scanner on the smartphone, meaning the 8-megapixel camera at the front may function for a face unlock feature. The smartphone is said to be fuelled by a 4230mAh battery. In terms of dimensions, the Oppo A5 measures 156.2x75.6x8.2mm.

In terms of design, the leaked renders show the Oppo A5 to come with a polygon design on the back, similar to the Realme 1. The images also suggest that the smartphone will arrive in at least two colour variants - Blue and Pink. It is seen to be featuring a 3.5mm headphone jack and a Micro-USB port. Notably, there is no information regarding the price and availability of the Oppo A5.

End of the Line for ASIMO, Honda's Famed Robot?
Is Simplifying Use by Businesses the Key for WhatsApp Payments in India?