OnePlus Two Listed by Online Retailer Along With Specifications

While the OnePlus One craze is still at its peak, an e-commerce retailer has listed what is claimed to be the OnePlus Two, priced at $551.99 (roughly Rs. 34,000). Notably, the listing also throws some light on the device's specifications.

The listing image of the OnePlus One successor shows three devices out of which two are handsets and the third a tablet.

The image and specifications of the listed OnePlus successor however should be taken with a pinch of salt as the OnePlus Two is said to sport a different form factor, as per OnePlus' Co-Founder and Director, Carl Pei. "Next year, we're looking into experimenting with different types of form factors and different types of products. And of course, everyone knows OnePlus Two is our next flagship coming up next year, we're going to announce it in Q2 or Q3, a one year cycle basically," he re-confirmed in our recent interview. 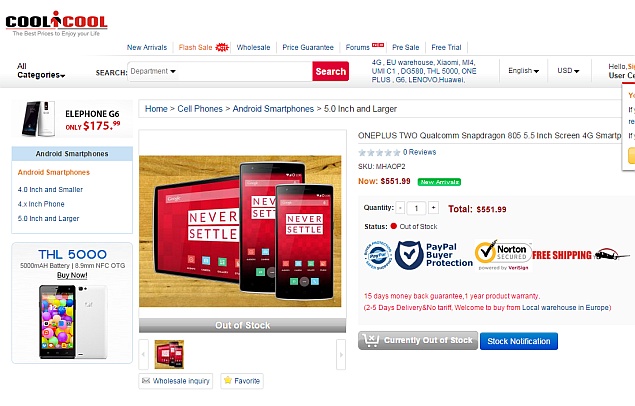 Also according to Pei, the OnePlus Two smartphone will likely be smaller than the One smartphone. "We've seen a lot of people asking for a smaller device, and want to let everyone know that we hear you. We're thinking about it," he said during a Reddit AMA session. As for the tablet shown in the listing image, the company is yet to reveal any details.

OnePlus on Tuesday launched its One smartphone in India priced at Rs. 21,999 for the 64GB version (Sandstone Black). Notably, no 16GB (Silk White) version will be made available in India. The smartphone is available via invites from Tuesday, exclusively on Amazon.in.

(Read: How to Get a OnePlus One India-Specific Invite)

A 10-day return policy by Amazon was also announced, while HCL Care will exclusively handle after sales service across more than 20 service centres in India.

French Official Campaigns to Make 'Right to Be Forgotten' Global
Xiaomi Redmi Note Review: A Big Screen on a Budget