While we are very much aware of the OnePlus One successor, OnePlus Two, arriving this year, the specifications of the smartphone have remained a mystery, with rumours all we had to go by. Recent GeekBench benchmark results purportedly of the OnePlus Two may however provide some more insight about the innards of the upcoming smartphone.

Recent GeekBench results of a handset named "OnePlus ONE A2001" indicate the smartphone will run Android 5.1 Lollipop, and would be powered by a 64-bit 1.55GHz octa-core Qualcomm Snapdragon 810 (MSM8994) processor. The results also list 2.7GB RAM (implying a total of 3GB of RAM). The alleged OnePlus Two has also received scores of 1256 for single-core and 4093 for multi-core. 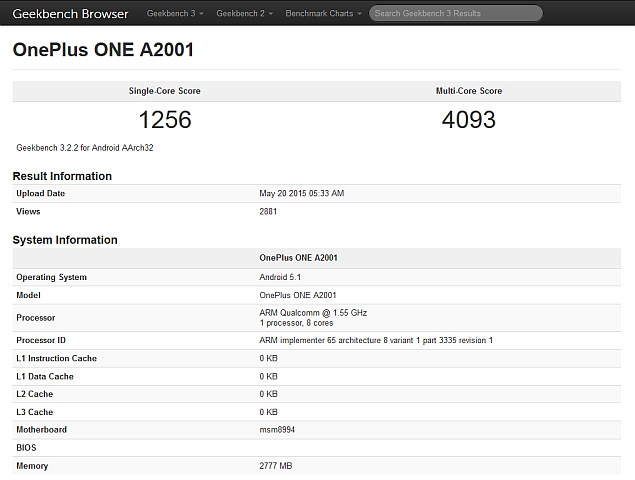 The presence of Qualcomm Snapdragon 810 shouldn't come as a surprise as the company CEO Peter Lau earlier this month hinted the same SoC for the device alongside its price.

The CEO asked his followers on Weibo what price tag the OnePlus Two should sport if it comes with a Qualcomm Snapdragon 810 SoC. After receiving several answers, Lau agreed with some of his followers who had suggested a price of CNY 2,499 (roughly Rs. 25,000). Lau had asked, "If OnePlus Two comes with Snapdragon 810, what do you think will be the price?" and then later replied, "2,499 Yuan seems to be a reasonable price."

A report in January tipped that the OnePlus Two smartphone will feature the same 5.5-inch display panel as seen on the original OnePlus One, but with an increased resolution from full-HD (1080x1920 pixels) to QHD (1440x2560 pixels).