OnePlus has finally started rolling out the CM11S 05Q update to One users over-the-air (OTA) with several improvements and promised features. The update is based on Android 4.4.4 KitKat OS also brings the much-awaited SwiftKey and the MaxxAudio by Waves integration.

"SwiftKey and MaxxAudio by Waves, which have always been a OnePlus staffer favourites when it comes to keyboards and sound performance, are now an integrated to the OnePlus experience with this update," said the OnePlus blog post.

As announced earlier this month, the SwiftKey keyboard with the latest update has brought typing support for 81 languages besides other features like SwiftKey Flow, multiple themes and layouts. Users now have the option to switch back to smartphone's default keyboard and deactivate the SwiftKey app if in case they don't like it. The app however, will be switched off by default once the update is completed. Users would have to navigate through their handset settings to activate the third-party keyboard in both the Language and Input menus.

As for the MaxxAudio integration, OnePlus as announced in December last year, has integrated MaxxAudio directly into the phone's AudioFX equaliser. The service has been custom-tuned for the OnePlus One's speakers and the company's Silver Bullet and JBL E1+ headphones. Users now get 10 different equalizer presets, ranging from classical music to jazz, heavy metal and hip hop.

The CM11S 05Q update also brings improvements to BlueDroid, updated configuration for NFC, updated media codecs and several security bug fixes. Under the camera section of the One smartphone, the CM11S 05Q OTA update now brings a total of three video focus options: auto, continuous, and infinity. Other inclusions are regulatory information, audio output latency optimization, LED overlays, and an ANT+ library. The update also improves the translation in Apollo, CMAccount and in the whole system in general.

Interestingly, some features have also been removed after the OnePlus' latest update. The firm now has removed some key layouts which were hardly used, "non-existent" ringtones, unused strings in CMAccount, and the option for a silent alarm ringtone. Changes in the dialler, clock and gallery apps has also been made. The full changelog can be seen on the OnePlus blog post.

With the Android 4.4.4 KitKat-based CM11S 05Q update now rolling out, the next update by OnePlus is expected to be the recently introduced OxygenOS, a custom ROM based on Android 5.0 Lollipop. The CM12S build for the OnePlus One has also entered final testing, and should be rolled out soon.

OnePlus One users in India are unlikely to receive the CM11S 05Q update over-the-air, with Cyanogen in December confirming that OnePlus One owners who bought the handset in India will no longer receive OTA updates. To bypass this limitation however, users can download (via Android Police) the signed OTA update in the form of a zip file, and apply it using the stock Recovery option - which needs to be enabled via Developer options > Advanced reboot. Those with rooted OnePlus One smartphones or with custom recovery enabled will also be able to install the update via the zip file. 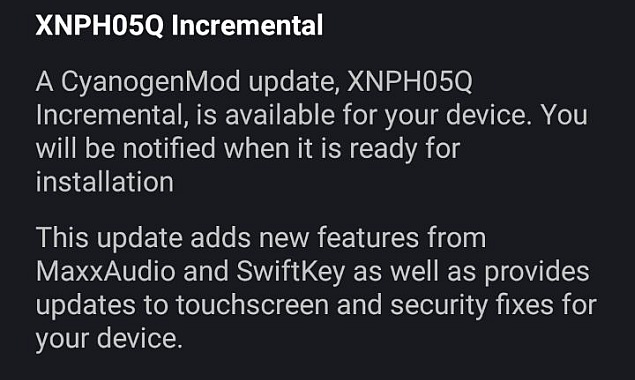 Some users are reporting the availability of the OTA update in India, including some of our colleagues. The fact that the update has been made available to users who bought the handset in India does indicate Cyanogen's last promised CM12S update may also be made available in this fashion, despite previous statements to the contrary. We'll have to wait and see if this is the case.