Share on Facebook Tweet Snapchat Share Reddit Email Comment
OnePlus has announced that the '2014 flagship killer' smartphone will be available without invites from Monday. The announcement, made on the company's blog, also applies to India. The company stressed that 'open sales' are being announced to celebrate the one-year anniversary of the OnePlus One's global launch.
The One smartphone is now available exclusively via Amazon India and will require no invites. As before, the 16GB Silk White OnePlus One (Review | Pictures) is priced at Rs. 18,999, while the 64GB Sandstone Black variant is priced at Rs. 21,999. 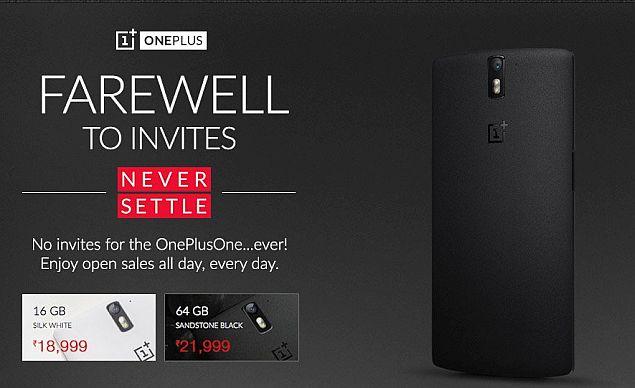 The company further to sweeten the deal for interested consumers also announced an add-on offer for India valid till Thursday. Under the promotional offer, consumers can get flat 50 percent discount on accessories along with the purchase of the OnePlus One smartphone in the limited period. The three accessories included in the limited period offer include OnePlus JBL E1+ Earphones, OnePlus Flip Cover (White), and OnePlus Premium Matte Screen Protector.

Commenting on the announcement, Carl Pei, Co-Founder and Head of Global, OnePlus, said, "By rigorously testing and improving our logistical structure over the last one year, we are far more confident that our processes have matured enough for us to handle the increased production and after-sales support that comes along with opening up sales. It's what we've been working towards, and now we're ready."

Pei also dropped a hint that the company is gearing up to introduce the successor to the One smartphone, the OnePlus 2. He added, "This current shift from an invite system to a non-invite system is a big step, one from which we will learn a great deal before the OnePlus 2 launch, with invites, in the third quarter of this year."