OnePlus One 64GB Variant Price Slashed to Rs. 19,998 Only for Thursday

OnePlus India has announced a limited period discount of Rs. 2,000 on the One smartphone's 64GB model. The handset will be available to buy at reduced price of Rs. 19,998 only on Thursday via exclusive online partner Amazon India.

Announcing the price cut, OnePlus India said on Twitter, "Get Rs. 2,000 off on every purchase of #OnePlusOne 64GB starting tonight from amazonIN. Offer valid only for June 18th." 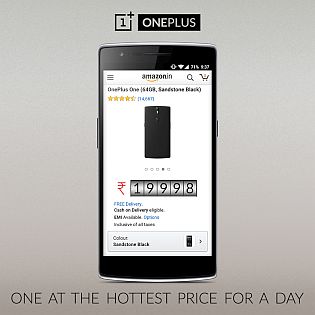 Notably, the one day price cut on the OnePlus One smartphone brings it closer to the new price of the Xiaomi Mi 4 64GB model which recently received a permanent price slash and is currently retailing at Rs. 19,999, down from the Rs. 23,999 launch price. The move is also timed around the price cut of the Mi 4 16GB variant, which is now Rs. 5,000 cheaper than its launch price of Rs. 19,999.

NDTV Gadgets had contacted OnePlus to find out about the price drop being available in other regions, and was informed that the special prices were only for the US and Europe markets, and that there were no plans for a permanent price drop in India.

Back in April, OnePlus announced that the '2014 flagship killer' smartphone would be available without invites and it was also applicable for the Indian market.

To recall, the OnePlus One (Review | Pictures) features a 5.5-inch IPS LCD display with a 1080x1920 pixel resolution and offers a pixel density of 401ppi. The display boasts of Corning Gorilla Glass 3 protection. It comes with 3GB of RAM and is powered by the quad-core Qualcomm Snapdragon 801 clocked at 2.5GHz with Adreno 330 GPU. It sports a 13-megapixel rear IMX214 sensor with six lenses and f/2.0 aperture and also comes with a 5-megapixel front-facing camera. Connectivity options on the OnePlus One include 4G LTE, Wi-Fi 802.11 a/b/g/n/ac, Bluetooth 4.0, and NFC functionality. It features a 3100mAh non-removable battery.