OnePlus Nord is seen scratching at level 6 on the Moh scale with deeper groves at level 7. 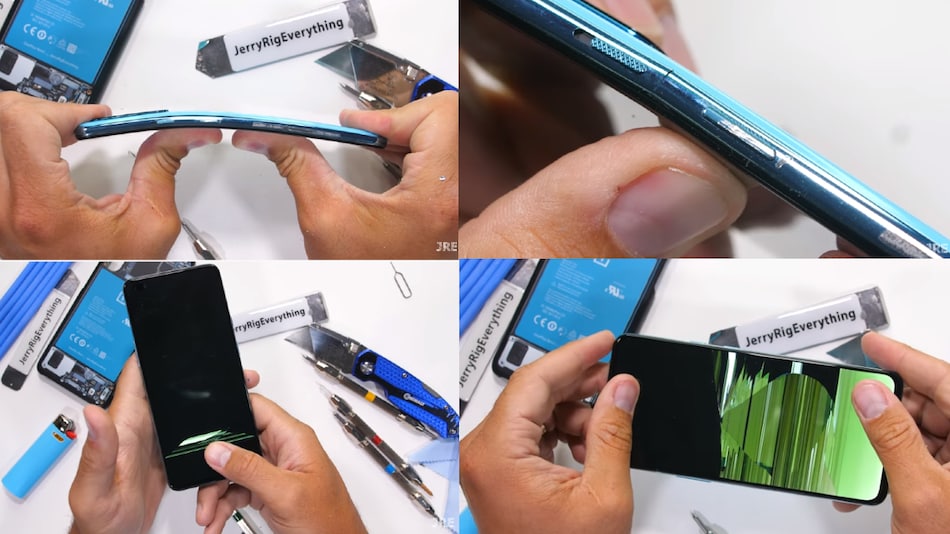 OnePlus Nord does not fully recover from the fire test either

OnePlus Nord has been put through JerryRigEverything's durability test and it seems to have passed the scratch test, but yielded during the fire and bend tests. The OnePlus Nord succumbs to pressure with its internals cracking through and the phone being rendered useless after a considerable amount of pressure is put onto it. The OnePlus Nord is the company's new mid-range device, and the durability test reveals some compromises had to be made to meet the aggressive price point. The phone was launched in India last week.

Zack Nelson of JerryRgEverything starts the OnePlus Nord durability video test by scratching the surface at different levels. The phone is seen scratching at level 6 on the Moh scale with deeper groves at level 7. The OnePlus Nord has Gorilla Glass 5 protection up front. He noticed a plastic buffer layer between the front glass and the frame of the phone adding extra protection for occasional falls.

Interestingly, during the durability testing, it is discovered that the OnePlus Nord does not have a metal frame. It has a silver anodised coating to create the illusion of a metal frame, but the frame is actually plastic. The power button and the switch are made from metal though, and the back of the phone is made of glass. The SIM tray is seen to have ingress protection for added safety.

During the fire test, the OnePlus Nord pixels start to go white after about 20 seconds of continuous flame. These pixels never fully recover from the heat, Nelson says. Scratches don't seem to affect the efficiency of the optical fingerprint scanner, which is great.

However, during the bend test, OnePlus Nord structural issues are highlighted, with a noticeable kink right after the first pressure was applied. After Nelson puts more bending pressure on the phone from the front, a snap is soon heard, and the frame near the volume button seems to have cracked. Soon, the display goes kaput, rendering the phone useless. The exterior glass at the front and back does not get any cracks, but the interior display underneath the glass succumbs under pressure.

Nelson notes that the pressure he put on OnePlus Nord ‘isn't normal' and a phone isn't put through that kind of pressure during everyday use. However, he advises OnePlus Nord users to keep their phones in a safe place when entering an extreme situation, and probably avoid the back pocket.