OnePlus Clover is expected to come with 4GB RAM and run on Android 10.

OnePlus Clover, believed to be a new mid-range offering from the Chinese smartphone giant, has allegedly been spotted on Geekbench. A OnePlus device labelled ‘OnePlus CLOVER' surfaced on the benchmarking site, listing several specification details that could be expected from the mysterious new phone. These suggest the inclusion of a Qualcomm Snapdragon 660 SoC and 4GB of RAM, among others. In another report, references to yet another alleged OnePlus phone, codenamed ‘Billie,' was spotted in the OxygenOS Settings APK late last month.

The alleged new OnePlus smartphone was spotted on Geekbench with the label ‘OnePlus CLOVER' yesterday by PhoneArena. According to the listing, the device is expected to be powered by an octa-core Snapdragon 660 SoC, with a base frequency of 1.84GHz. It may carry 4GB RAM and is expected to run on Android 10. 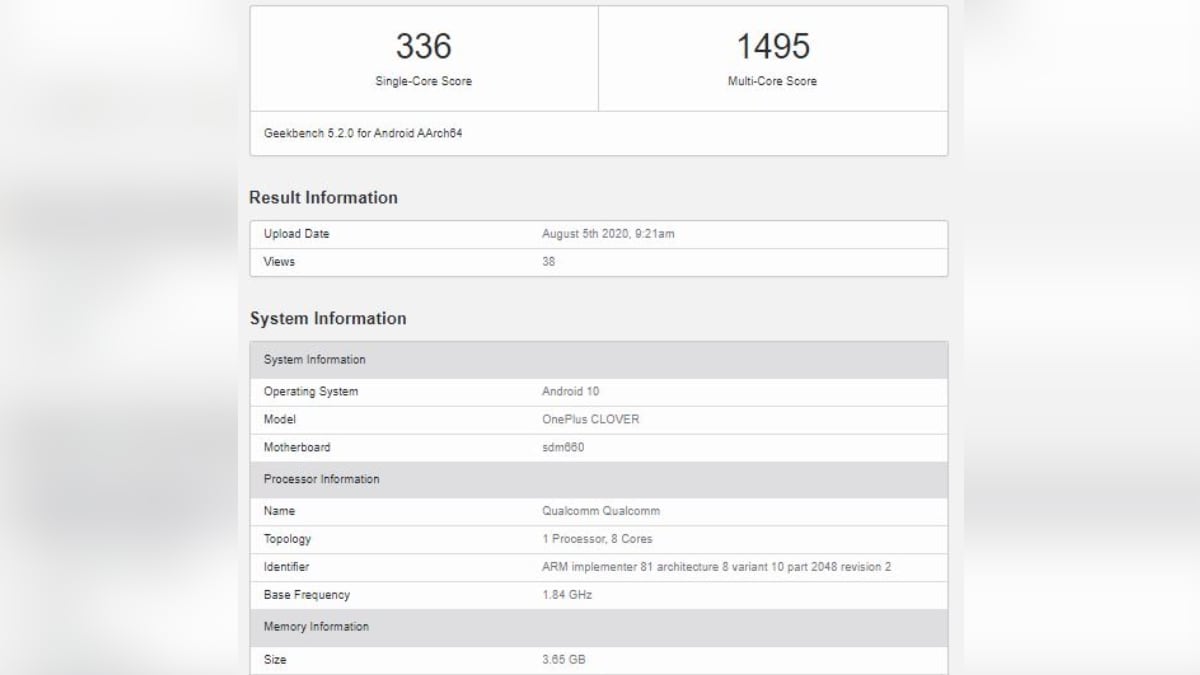 In terms of scores, the OnePlus Clover posted 336 points in the single-core segment. In the multi-core tests, it scored a total of 1,495 points. Given that the chipset listed on the phone was launched way back in 2017, it can be speculated that the OnePlus Clover could be much less expensive than the recently launched OnePlus Nord, which carries a pocket-friendly price tag of Rs. 27,999. The OnePlus Nord is powered by the much more recent, and more powerful, Snapdragon 765G SoC.

Late last month, OnePlus confirmed a Nord-branded smartphone would launch in the US later this year, and the OnePlus Clover may be part of this series the company has teased. To recall, alongside, XDA Developers spotted references to another alleged OnePlus phone, codenamed ‘Billie.' Digging through the latest version of OxygenOS 10.5 for the OnePlus Nord, the publication discovered multiple calls to a method called “isSM6350Products.” After checking the model of the device, the method returns true if the model name matches “BE2025”, “BE2026”, “BE2028”, or “BE2029.” The use of a Snapdragon 690 SoC was also tipped.

The report speculates that this may be references to an upcoming phone from OnePlus, with the codename ‘Billie.' The report also suggests that the name likely refers to the popular British artist, Billie Eilish. Going by a code withing the OnePlus Launcher APK, the publication suggests that OnePlus could be working on two different devices — Billie2T and Billie8T.

OnePlus, however, hasn't officially confirmed the development or launch date of any of the aforementioned devices as of yet.

Further reading: OnePlus Clover, OnePlus Clover Specifications, OnePlus Billie, OnePlus
Shayak Majumder Email Shayak Majumder Shayak Majumder is Chief Sub Editor at Gadgets 360. A journalist since 2013, he has worked both on the field as well as behind the desk in several organisations including Indian Express Online and MSN. As a reporter, he covered a wide range of verticals, from politics to the development sector. While at Indian Express, he regularly reviewed video games, gaming hardware and the growth of MMORPG in India. He is also a passionate musician and a former trainer, currently working on his upcoming EP. ...More
Twitter Fixes Security Issue Affecting Some Android Devices
Samsung Galaxy Z Fold 2 Announced With Bigger Displays, Improved Hinge Over Last Year’s Galaxy Fold