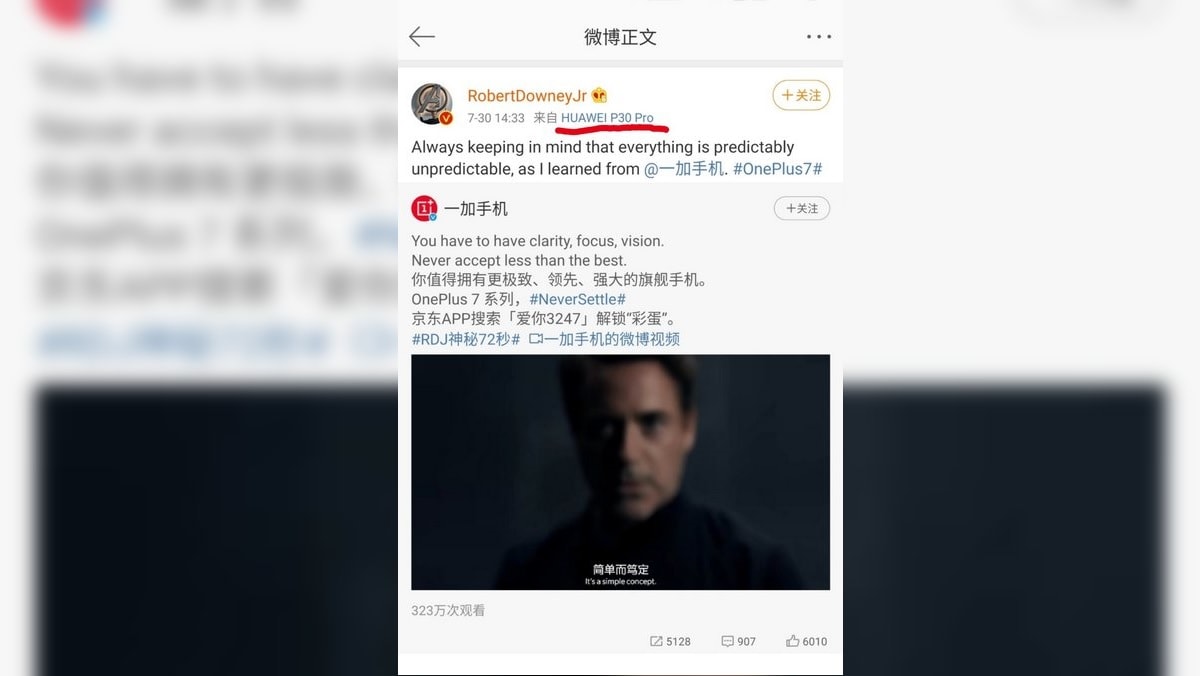 Much-loved Marvel hero and OnePlus ambassador Robert Downey Jr. was spotted posting about OnePlus 7 on his Weibo page using Huawei's flagship P30 Pro smartphone, the media has reported. OnePlus, which roped in the Hollywood actor earlier this year for endorsing it, has faced flak for paying for ads featuring him instead of waterproofing its smartphones.

On July 30, Robert Downey Jr. reportedly forwarded a Weibo using Huawei P30 Pro rather than his endorsed smartphone brand OnePlus 7. Although the post later disappeared from his Weibo profile, the eagle eyes of users captured the evidence in the screenshot before it got erased, tech portal huaweicentral.com reported on Wednesday.

This is hardly the first time a brand ambassador or an executive of one smartphone company was found using a phone made by another company. In an instance late last year, Samsung's Nigeria unit was found tweeting about Galaxy Note 9 using an iPhone.

It is quite possible in the case of Robert Downey Jr. that it was someone else posting on his behalf on Weibo, rather than himself.

OnePlus had signed up Robert Downey Jr. in May this year to lead the company's new marketing campaign.

“We, at OnePlus believe in having a laser focus in everything we do and in doing whatever it takes to create an exceptional experience for our community. Working with Robert Downey Jr, we see that these ideologies are reflected in him as well, in his creativity and dedication,” Pete Lau, Founder and CEO of OnePlus, had said at the time. “This synergy has us convinced that nobody could represent what we stand for better and we are delighted to welcome Robert Downey Jr. into the OnePlus family."

Even as OnePlus has always touted its commitment to getting its users the highest specs at the lowest prices, its phones have lacked official IP certification for water resistance.

Micro-blogging site Weibo is one of China's most popular social platforms.