The new OxygenOS update fixes battery problem on both OnePlus 8 and OnePlus 8 Pro.

OnePlus 8 series was launched in India in April

OnePlus 8 Pro and OnePlus 8 phones are receiving new OxygenOS updates that bring the June 2020 security patch and several other improvements. The system updates for both phones add improved system stability and bug fixes for issues with the battery and HD videos on Netflix and Amazon Prime Video. Additionally, OnePlus 8 Pro users are getting an "adjusted Photochrom filter," that the company had disabled in India prior to its first sale on June 15. The Photochrom filter that enabled the Color Filter camera on OnePlus 8 Pro, was initially found to have “see-through” capabilities for some materials.

The OnePlus 8 in India is receiving the OxygenOS 10.5.9.IN21DA through an over-the-air (OTA) update, according to user reports on OnePlus 8 community forum. Users can check its availability by heading to Settings > System > System Updates.

The OxygenOS update for OnePlus 8 is 155MB in size and brings the June 2020 Android security patch. The update also optimises touch and interaction experience, power consumption, and high-temperature warning.

Additionally, the battery problem on OnePlus 8 where it failed to attain full charge after 90 percent is also fixed. Other known issues with Netflix and Amazon Prime Video are resolved too, as per the changelog. OnePlus has also improved the "shooting experience with camera" with the latest system update on OnePlus 8.

The OnePlus 8 Pro users in India are getting OxygenOS 10.5.11.IN11DA through an OTA update as well. Gadgets 360 was able to verify the update OnePlus 8 Pro, and users can check its availability by going to Settings > System > System Updates.

According to the OnePlus 8 Pro system update changelog, the update is 154MB in size and also brings the June 2020 Android security patch. Most of the system improvements and bug fixes are similar to that of OnePlus 8 software update. 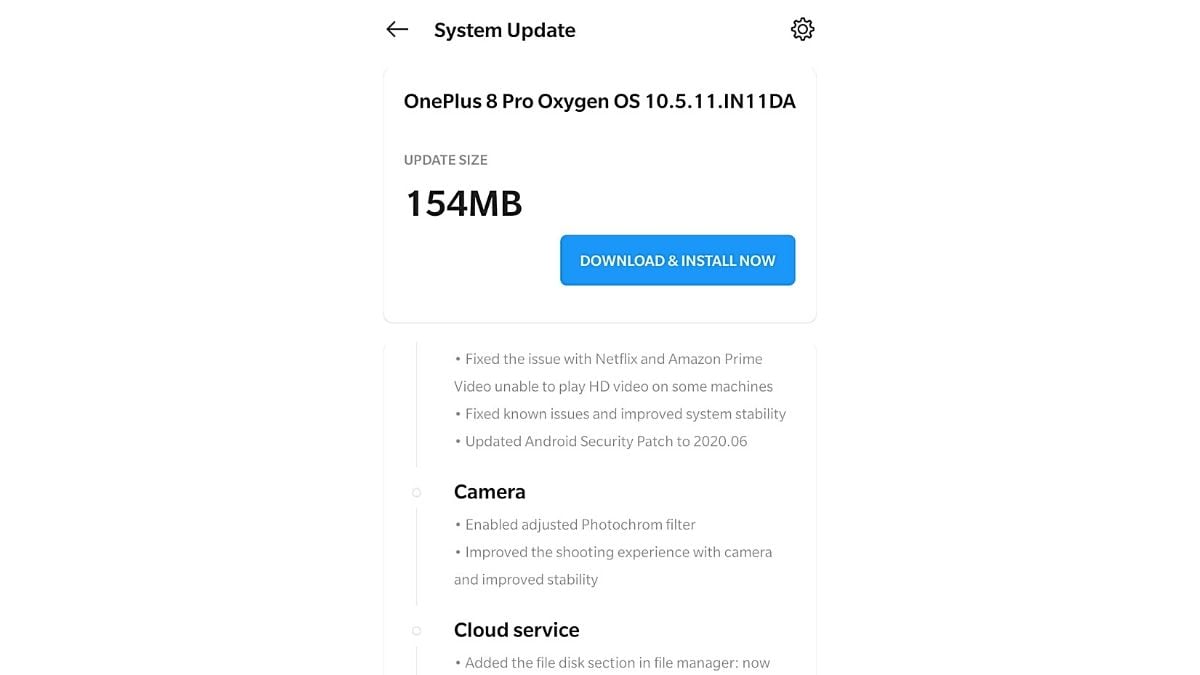 OnePlus has also added the file disk section in the File manager on OnePlus 8 Pro. This will allow users to upload and store files on OnePlus Cloud "conveniently." Another important feature added by the latest OxygenOS update is the "adjusted Photochrom filter."

It essentially means that users can now use Photochrom filter as the update on OnePlus 8 Pro, fixes the see-through issue. It is important to note that after selecting the Photochrom filter, photos are still captured by the main 48-megapixel camera, however, the filter on top of the photo is added by the 5-megapixel Colour Filter camera.

As mentioned, the Colour Filter camera was disabled before the phone officially went on sale in India in June.

OnePlus 8 and OnePlus 8 Pro with Snapdragon 865 SoC, were launched in India in April.