OnePlus is rolling out yet another update to the OnePlus 8 Pro, which was launched last month

OnePlus 8 Pro gets another update to improve camera performance

The new software update was spotted on Reddit as well as the OnePlus community where OnePlus 8 Pro users reported receiving it. This new software update brings OxygenOS 10.5.6 for the international variant of the OnePlus 8 Pro and is 122MB in size. The update is currently rolling out to OnePlus 8 Pro users as an OTA update. OnePlus has not yet detailed the update officially in a forum post, and when we reached out to the company, it confirmed the rollout. The details the exact same changelog as seen in the user-shared screenshot, excluding what's present under the Network sub-head. 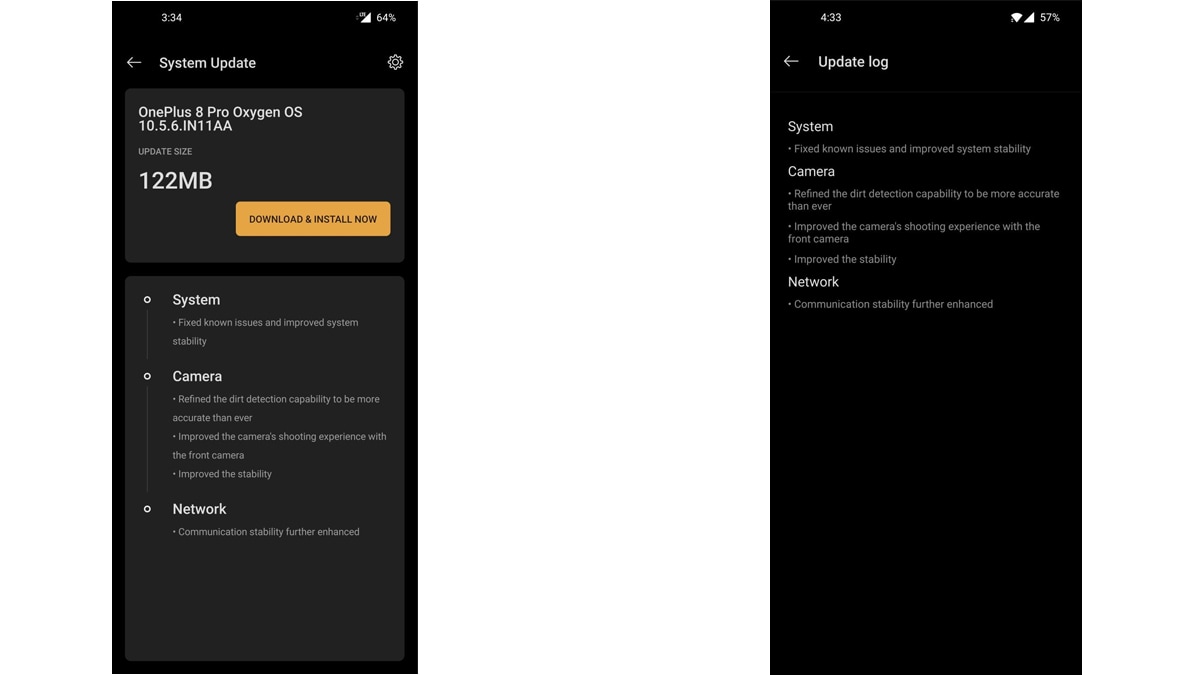 The new software update comes days after OnePlus released OxygenOS 10.5.5 for the OnePlus 8 Pro. This new software update mainly focuses on the camera performance of the smartphone. The changelog for this update mentions improved camera shooting experience with the front camera, refined dirt detection capability and camera stability improvements.

It isn't all about the cameras, it also fixes system issues and improves system stability but does not mention which issues are fixed. Network stability enhancements are also a part of this new software update.

OnePlus has been rolling out software updates to improve camera performance on the OnePlus 8 Pro. The previous software update brought improvements to white balance and focus in low-light conditions.

Further reading: OnePlus, OnePlus 8 Pro, OxygenOS
Aditya Shenoy Email Aditya
Aditya Shenoy reviews smartphones, wearables, headphones and speakers for Gadgets 360, out of Mumbai. Aditya is a reviewer for Gadgets 360 and has written extensively about smartphones, software updates, and upcoming devices. Aditya is available on Twitter at @adishenoy, and you can mail him at adityashenoy@ndtv.com, so please send in your leads and tips. More
Battle of the Streaming Services: Which Is the Best Premium Video Service Right Now?
Samsung Galaxy Note 9 Expected to Get One UI 2.1 Update in June