OnePlus Launch Event started with the company's co-founder Carl Pei on the stage. He began by talking about OxygenOS. Pei cited a study that claims that OxygenOS is one of the top three reasons why OnePlus users love the company. He also talked about OxygenOS beta process and how it helps the company gather significant amount of feedback about the operating system before rolling out a new version widely. He detailed how all the consumer feedback has helped the company in building a great experience.

Pei revealed several new features that debuted with OxygenOS 10, including landscape app switching, updated Zen Mode, improved OnePlus Gallery, and new customisation options. According to Pei, OxygenOS 10 will soon get a real-time translation feature for video calls. Pei then invited Google's Andrei Popescu to talk a little about Android 10. According to Popescu, Android 10 improves on a lot of fronts, including Digital Wellbeing, Privacy, and Security.

Carl Pei then returned to the stage and revealed that OxygenOS 10 will be coming to OnePlus phones as old as OnePlus 5. It is already available for OnePlus 7 and OnePlus 7 Pro users. OnePlus 6 and OnePlus 6T owners will get the update this month.

OnePlus's Akis Evangelidis then joined the stage to talk about the OnePlus 7T that was introduced in India last month. It will be coming to Europe on October 17. Evangelidis detailed the OnePlus 7T for the European consumers. You can read all about it in our launch copy that is linked above.

Evangelidis then moved on to the OnePlus 7T Pro, the big launch of the day. OnePlus 7T Pro is powered by Qualcomm Snapdragon 855+ SoC, 4085mAh battery with Warp Charge 30T, 8GB of RAM, and up to 256GB of onboard storage. 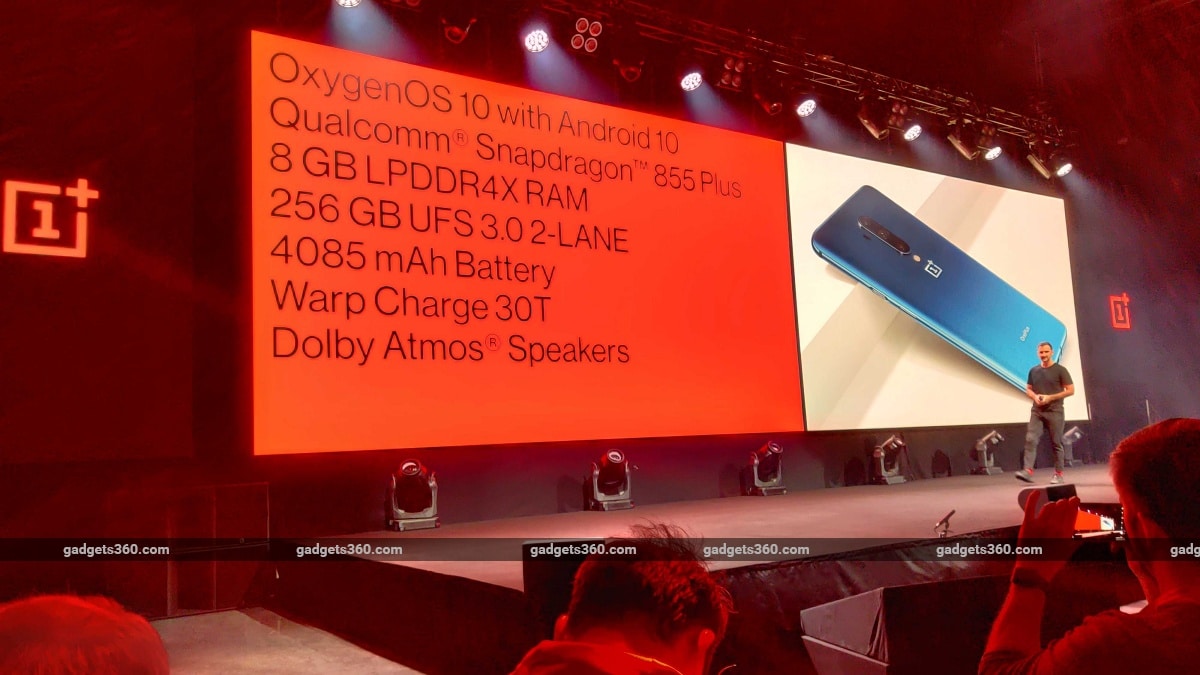 Kate Parkyn from OnePlus then joined the stage to unveil the new OnePlus 7T Pro McLaren Edition. The smartphone shares almost all specifications with the OnePlus 7T Pro. In terms of the differences, the McLaren Edition packs 12GB of RAM and 256GB of onboard storage. There will be just one storage model of the phone. In terms of the design, it sports a papaya orange finish that can seen on the edges, camera module, and notification slider.

There are some software tweaks as well, like custom-made icons, exclusive animations, themes, and wallpapers. Also, the phone case of the OnePlus 7T Pro McLaren Edition is made with Alcantara, a composite fabric material.

In India, the OnePlus 7T Pro price is set at Rs. 53,999, whereas the McLaren Edition will cost Rs. 58,999. The OnePlus 7T Pro will go on sale starting 12pm (noon), October 12 via Amazon India, OnePlus.in, OnePlus offline stores. There will also be a special sale for the phone on October 11 at 12pm (noon) at OnePlus Exclusive Stores in 8 cities in the country, nothing early online though.

The McLaren Edition will be available in India on November 5 via Amazon, OnePlus.in, and OnePlus offline stores. Limited units of the phone will be put for pre-bookings on October 11 via OnePlus Exclusive Stores and they will ship on October 18. Pre-bookings will also be eligible for a pair of Type-C Bullets.

This is it. You can check out the full event video below.

Further reading: OnePlus 7T Pro, OnePlus, oneplus 7t pro specifications, OnePlus 7T Pro McLaren Edition
Gaurav Shukla Email Gaurav Gaurav Shukla is a part of the Gadgets 360 news team and based out of New Delhi. Gaurav is responsible for making sure Gadgets 360 news section is updated with the latest happenings from the world of science and technology. When he is not editing or assigning stories, Gaurav writes about mobile devices, social media, and the Internet at large. With over 11 years of experience in tech journalism, Gaurav has reported on everything from the first Android phone to reach the Indian market to how the ...More
Apple Starts Selling Microsoft's Xbox Wireless Controller on Its Store, No Sign of PlayStation DualShock 4 Yet
Nokia 2.2, Nokia 3.2 Price in India Cut; Now Start at Rs. 6,599