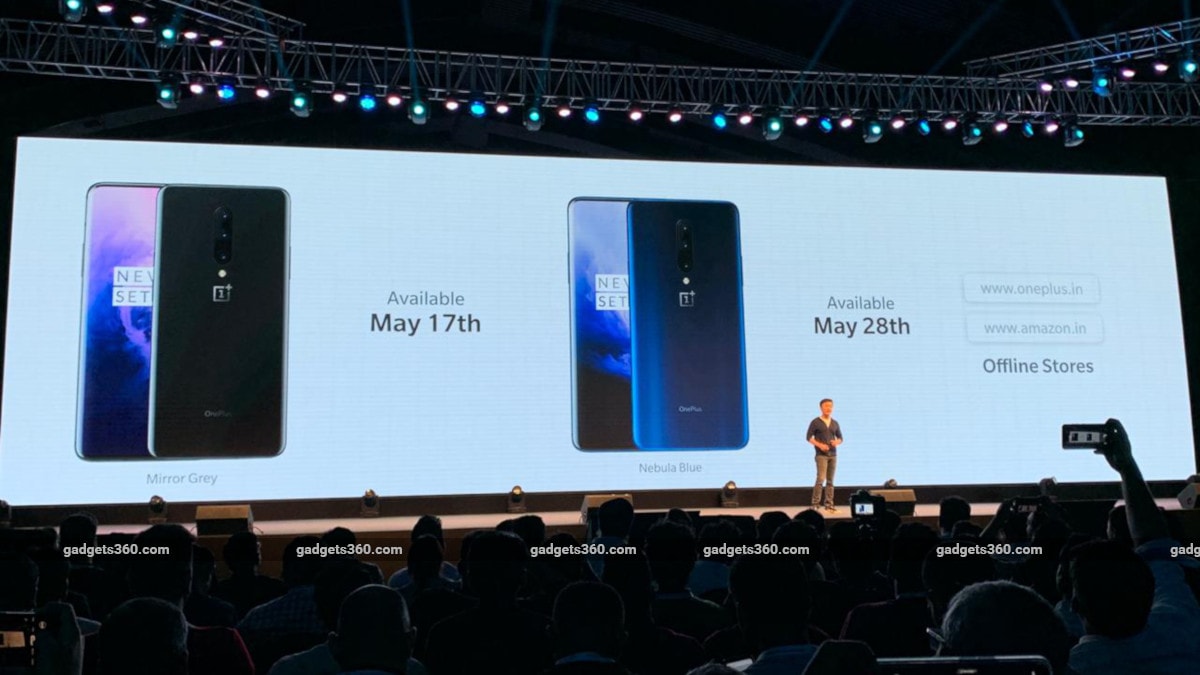 OnePlus 7 Pro sales will open in India on May 17

The much-anticipated OnePlus launch day began with Carl Pei on stage. He talked about OnePlus' beginnings in India and revealed that the OnePlus 7 launch event is their biggest launch event ever. Pei also stated that OnePlus is the biggest premium smartphone brand in India. He revealed the company's retail ambitions and how the company plans to expand its retail footprint in the country. OnePlus is planning to open three new experience stores in 2019 in India - in Mumbai, Pune, and Hyderabad.

After retail updates, Pei moved to new product announcements. He stated that OnePlus is announcing three new products, with the first being Bullets Wireless 2 headphones. To detail the new headphones, he invited Tilen Pigac on stage.

According to Pigac, OnePlus Bullets Wireless 2 headphones have an improved fit, two balanced armature drivers for highs and mids, plus a 10mm dynamic driver for bass. There is AptX HD support and warp charge support as well. The new headphones will offer 4 hours of audio playback time on a full charge.

Following Bullets Wireless 2 announcement, Carl Pei returned to the stage and stated that he had a very special product for the OnePlus fans - OnePlus 7 Pro. According to Pei, OnePlus 7 Pro has an all-new design with curved edges on the front and back. It will be offered in Nebula Blue, Mirror Grey, and Almond colour options. He remarked that it is the most beautiful OnePlus they've ever made.

To talk more about HDR support and Netflix partnership, Pei invited Jerome Bigio from Netflix on the stage. Bigio talked about how Netflix content will look amazing on the new OnePlus 7 Pro smartphone because of the HDR10+ support.

DxOMark has given the OnePlus 7 Pro a score of 111 for camera quality, beating the Galaxy S10+, iPhone XS Max, and Pixel 3. The phone also features Google lens support.

Fnatic founder Sam Mathews joined Kopec on stage to talk about their collaboration with OnePlus on improving the gaming potential of the OnePlus 7 Pro. Mathews noted that OnePlus is working with the Fnatic esports team to create the "Fnatic mode" for extreme gaming on the new OnePlus phones. He also revealed that Fnatic is coming to India soon.

Kopec then moved to software and announced that OnePlus 7 Pro runs on Android 9 Pie with OxygenOS, which now includes several interesting features. The company also promised two years of Android updates and three years of security patches for OnePlus 7 Pro. The phone will also feature several India-specific software tweaks. All theses features have been developed in new Hyderabad R&D centre, and come from India community feedback.

Pigac then invited Pei on stage, who recapped a few OnePlus 7 details and then called Amazon India's Manish Tiwary to talk about the e-retailer's partnership with OnePlus in India. Tiwary shared various milestones the two companies have achieved in India.

Finally, Pei announced the pricing of the new products in India. OnePlus Bullets Wireless 2 headphones will cost Rs. 5,990. The OnePlus 7 Pro price in India starts at Rs. 48,999, whereas OnePlus 7 will retail starting at Rs. 32,999.

The customers will be able to purchase the OnePlus 7 Pro at the limited stock pop-ups in Bangalore, Mumbai, Delhi, Hyderabad, Chennai, Pune and Ahmedabad starting 7pm exclusively on 15th May 2019 and the OnePlus Experience Pop-up in Delhi starting 17th May 2019. The new products will be offered via Amazon.in, OnePlus.in, and OnePlus offline stores. Here are the full details.

You can watch the full OnePlus event video below.