OnePlus 7 Pro promotional video shows the phone in all glory.

OnePlus 7 Pro hands-on images have surfaced on the Web just hours before its formal debut. The images show the front and back of the upcoming phone and highlight the presence of features, including Dolby audio support. Separately, an alleged promotional video giving a glimpse at the OnePlus 7 Pro has been leaked on Reddit. The OnePlus 7 Pro is launching alongside the OnePlus 7 later today. OnePlus has scheduled simultaneous launch events for the OnePlus 7 Pro and regular OnePlus 7 in India (Bengaluru), London (UK), and New York (US). The event will begin at 8:15pm IST and will be live streamed through the OnePlus channel on YouTube.

The hands-on images of the OnePlus 7 Pro have been shared by a tipster who uses the Twitter handle Ice Universe. While two of the leaked images allegedly show the front of the upcoming OnePlus phone, one image reveals its back. The front panel of the phone shows the absence of a waterdrop-style notch. This suggests a pop-up selfie camera, which was spotted on a list of leaked OnePlus 7 Pro renders. 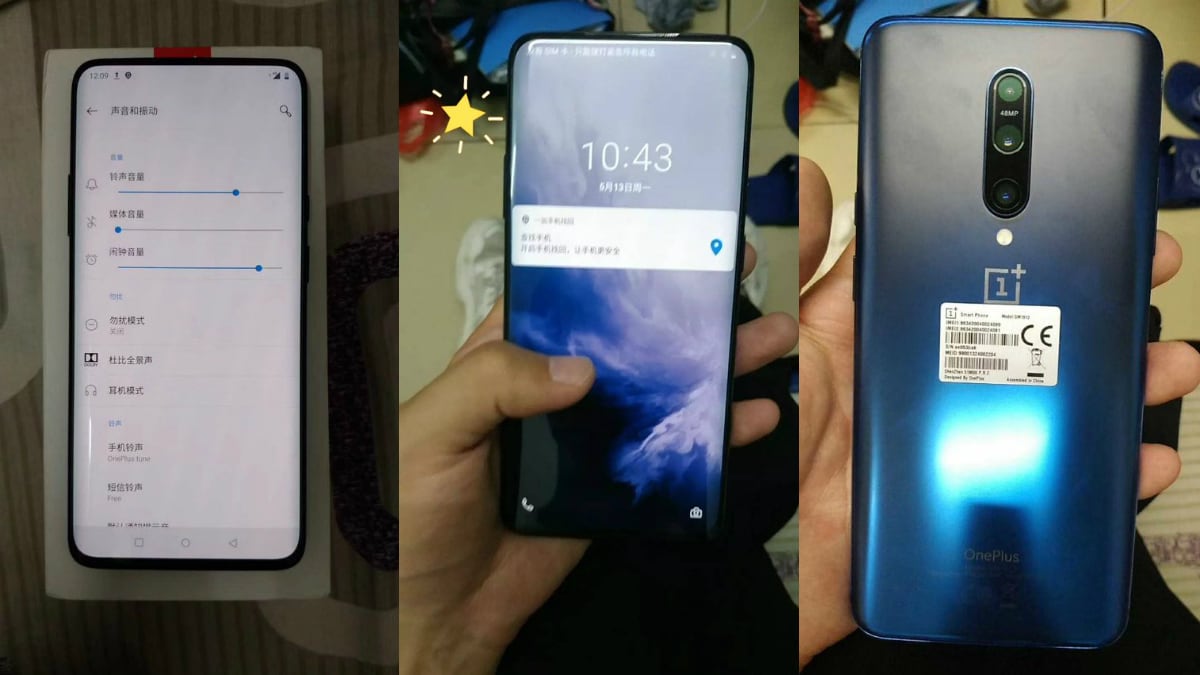 The purported back of the OnePlus 7 Pro shows a minimal, curved design and highlights a triple rear camera setup, paired with an LED flash. The OnePlus logo on the back -- alongside a separate "OnePlus" branding. The OnePlus 7 Pro is also rumoured to have an in-display fingerprint sensor. Therefore, the images don't showcase any traditional fingerprint sensor. An LED flash module can also be seen from the back.

In addition to the hands-on images, the promotional video of the OnePlus 7 Pro has surfaced on Reddit, as spotted by tipster Ishan Agarwal. The video shows the new OnePlus phone in three distinct colour options. These could be Nebula Blue, Mirror Grey, and Almond that all got leaked recently. Also, the video highlights various aspects such as the triple camera setup, thin-bezel display, and a pop-up selfie camera.

The OnePlus 7 Pro is likely to run Android 9 Pie and is rumoured to have a 6.7-inch curved Quad HD+ (1440x3120 pixels) Super AMOLED display, along with a pop-up selfie camera. The phone will also come with a Snapdragon 855 SoC that is claimed to be paired with up to 12GB of RAM and 256GB of onboard storage.

The OnePlus 7 Pro is expected to have USB Type-C port and support Warp Charge 30W fast charging tech. Besides, it is rumoured to come with a 4,000mAh battery.