OnePlus 7T's India launch may also have something to do with the price cuts.

OnePlus has just launched its newest smartphone in India, the OnePlus 7T, which is priced at Rs. 37,999 onwards. OnePlus' two other devices from 2019 that were launched in May remain on sale, but will be getting a temporary discount in the upcoming Amazon Great Indian Festival Sale. From September 29 to October 4, the OnePlus 7 will be available at a discounted price of Rs. 29,999 for the base variant with 6GB of RAM and 128GB of inbuilt storage, while the OnePlus 7 Pro will have a starting price of Rs. 44,999 for its base variant.

The price drop is significant, with the OnePlus 7 (Review) and OnePlus 7 Pro (Review) smartphones getting discounts of Rs. 3,000 and Rs. 4,000 respectively, down from Rs. 32,999 and Rs. 48,999 respectively. The exact discounted prices of higher-end variants have yet to be revealed. A lot of buyers who have been holding off purchases could now be tempted to go ahead and take the plunge, especially since the OnePlus 7T will be available at a much higher starting price of Rs. 37,999 for the variant with 8GB of RAM and 128GB of storage. 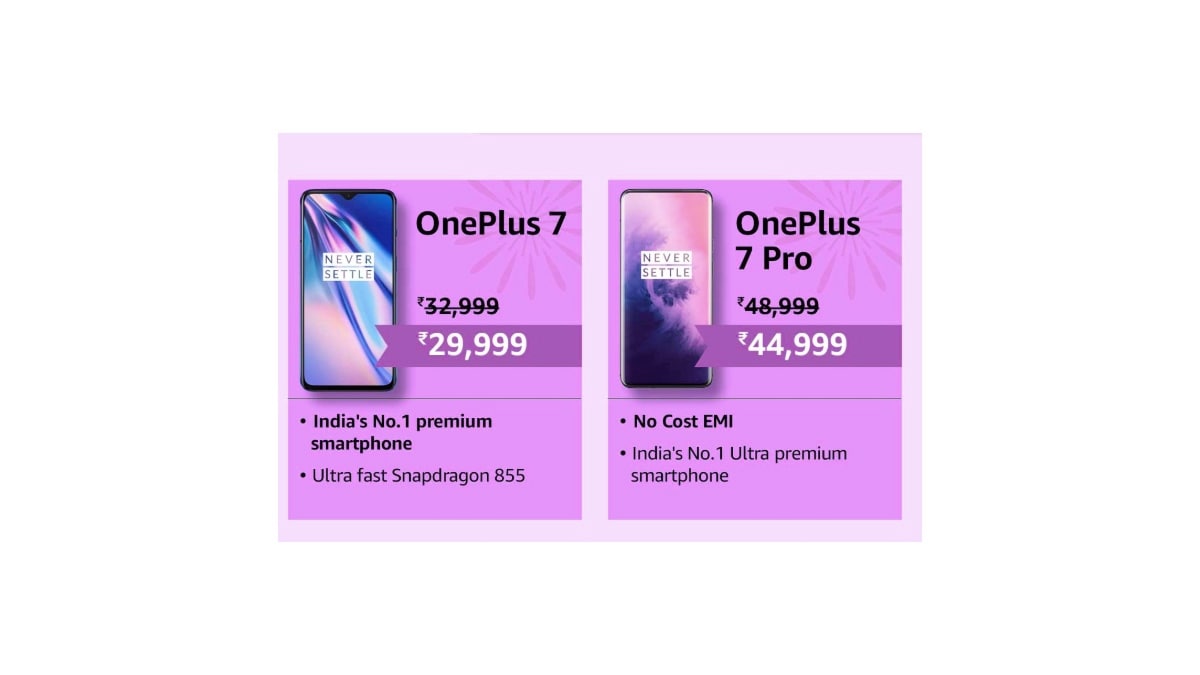 The OnePlus 7T (Review) has been launched at a starting price of Rs. 37,999, and will also go on sale during the Amazon Great Indian Festival. The new smartphone is powered by the Qualcomm Snapdragon 855+ processor, and features a 90Hz display, a triple-camera setup, and runs Android 10 out-of-the-box.

OnePlus also notably forayed into the television space with the launch of the OnePlus TV. The new TV range is available in two variants - the OnePlus TV Q1 (Rs. 69,900) and OnePlus TV Q1 Pro (Review) (Rs. 99,900). The televisions have 55-inch 4K QLED displays, run on Android TV 9.0, and feature various software customisations such as OxygenPlay and the OnePlus Connect app.

Further reading: OnePlus 7, OnePlus 7 Pro
Ali Pardiwala Email Ali
Ali Pardiwala writes about audio and video devices for Gadgets 360 out of Mumbai, and has covered the industry for a decade now. Ali is a Senior Reviewer for Gadgets 360, where he has regularly written about televisions, home entertainment, and mobile gaming as well. He is a firm believer in 4K and HDR on televisions, and believes that true wireless earphones are the future of the personal audio industry. Ali is available on Twitter as @AliusPardius and on email at alip@ndtv.com, so do send in ...More
NASA Video Shows a Black Hole Ripping Apart an Unfortunate Star the Size of Our Sun
How Shah Rukh Khan Helped Shape Netflix’s Bard of Blood