OnePlus 6T will indeed be the name of the OnePlus 6 successor. The phone made what can be described as a surprise appearance on Wednesday in the India vs Pakistan cricket match in a TV advertisement featuring OnePlus brand ambassador Amitabh Bachchan. Also the same day, the OnePlus 6T Amazon India landing page went live, allowing users to register and receive updates as and when there's new information tobe shared. Apart from this, a new leak has appeared online, claiming the OnePlus 6T camera setup will retain the dual sensor instead of going for a triple-sensor configuration.

Starting with the OnePlus 6T Amazon India landing page, the listing only shows the upcoming handset’s name with the ‘Coming Soon’ tag, and says it will be an Amazon exclusive. There’s also the ‘Notify Me’ button that allows users to sign up to receive notifications regarding the smartphone on their linked email ID. The wavy pattern on the right of the image, of course, alludes to the in-display fingerprint sensor — a feature that has previously been confirmed by OnePlus.

The name was also confirmed in the OnePlus 6T TV ad that was aired during the ongoing cricket match between India and Pakistan. Brand ambassador Amitabh Bachchan in the advertisement also alludes to the in-display fingerprint sensor, calling it “a cooler way to unlock your phone.” He also says, “The new OnePlus 6T is coming.” Two slogans also appeared in the advertisement, 'Touch for innovation' and 'Ready for speed' - both reiterating the faster unlocking with the in-display fingerprint sensor of the smartphone.

Lastly, a report by reputed tipster Roland Quandt of WinFuture claims that OnePlus is sticking to a dual camera setup for its second flagship of the year. This contradicts the previous reports that said OnePlus 6T will feature a triple camera setup on the back. A render image shared in the story shows the smartphone in Mirror Black finish. Also, compared to the current flagship, the OnePlus 6T will not have a fingerprint sensor on the back. It is also claimed the internals will be rearranged with the new model, with the noise-cancelling microphone moved from the right edge to the left and the Power button is also being moved downwards. The report also says that the new smartphone will be a little bigger in size compared to the current model and may feature a 6.41-inch display with 19.5:9 aspect ratio and 2340x1080-pixel resolution. 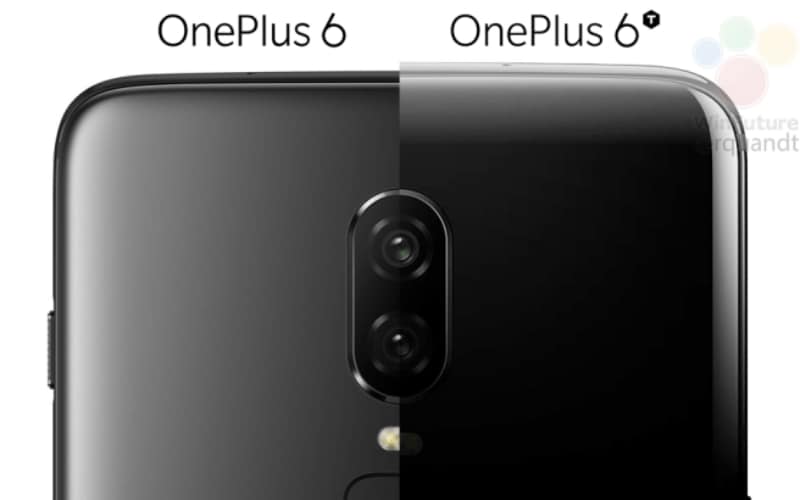 OnePlus 6T will be a little bigger in size compared to its predecessor owing to a larger display
Photo Credit: WinFuture.de

The smartphone is expected to be a small upgrade over this year's OnePlus 6, with a new features to make it a competitive option against the likes of new iPhone XS models, iPhone XR, and Samsung Galaxy Note 9, among other premium smartphones. Earlier leaks have claimed the OnePlus 6T smartphone will have a waterdrop display notch, 8GB RAM, 128GB and 256GB internal storage options, and a bigger battery than before. As for the processor, it is said to be powered either by the Snapdragon 845 SoC or the Snapdragon 710. The smartphone is likely to launch mid-October, and carry a price tag of around $550 (about Rs. 40,000).