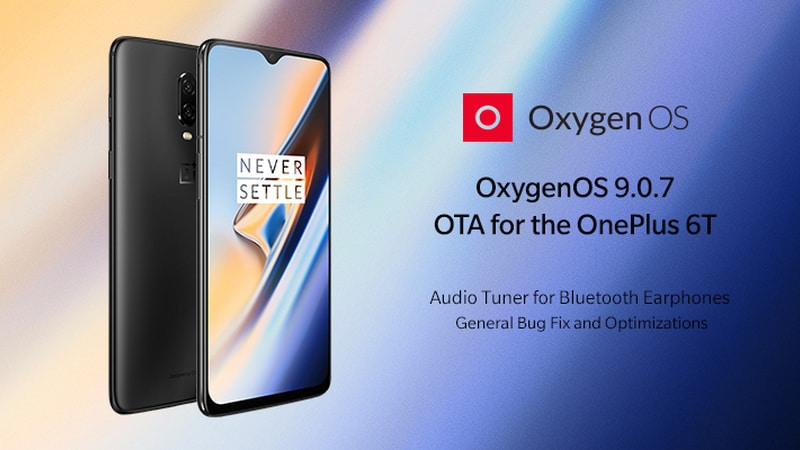 OnePlus 6T has received an OxygenOS update, bringing several improvements, optimisations, and fixes, apart from adding a new feature for Bluetooth earphones. The OxygenOS 9.0.7 update for the OnePlus 6T will be released in a phased manner, or 'incremental' as OnePlus calls it, and it will roll out in batches starting with a small number of users before a broader rollout in the coming days. To recall, the OnePlus 6T was launched with Android 9.0 Pie out-of-the-box, back in October, and went on sale in India the same month.

As for specifications, the dual-SIM (Nano) OnePlus 6T runs OxygenOS-based on Android 9.0 Pie. It sports a 6.41-inch full-HD+ (1080x2340 pixels ) AMOLED display with an 19.5:9 aspect ratio, as well as support for sRGB (100.63 percent) and DCI-P3 colour gamuts. The display is protected by Corning Gorilla Glass 6, and said to have a peak brightness of over 600 nits. It features a waterdrop-style notch, with three-in-one ambient light sensor, distance, and RGB sensor, as well as the front facing camera. The OnePlus 6T is powered by an octa-core Qualcomm Snapdragon 845 SoC, coupled with either 6GB or 8GB of LPDDR4X RAM.

The front camera on the OnePlus 6T features a 16-megapixel Sony IMX371 sensor with an f/2.0 aperture and 1-micron pixels. The front camera also supports EIS, and can recording 1080p video at 30fps and 720p video at 30fps. Notably, both the front and rear cameras are unchanged from the OnePlus 6. OnePlus is however also touting improved low-light photography with a feature called Nightscene. It produces brighter images in low-light, with reduced noise, using a new HDR algorithm across a 2-second exposure, and splicing together the resultant up to 10 multi-frame shots together.

SpaceX Launches Biggest US 'Rideshare' Mission With 64 Satellites
Selection Day, Roma, Mowgli: Legend of the Jungle, and More on Netflix in December 2018