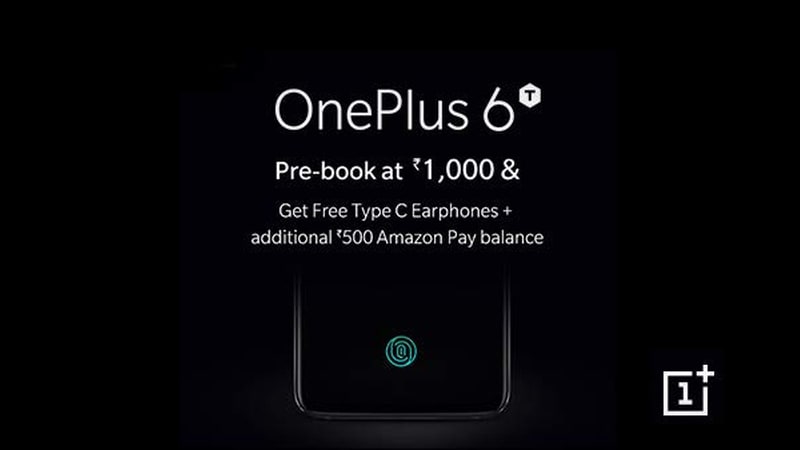 OnePlus 6T is all set to be unveiled on October 30, at simultaneous events in New Delhi and New York. The Chinese smartphone maker confirmed the launch event on Monday, and on Tuesday, announced that OnePlus 6T India pre-bookings are now open, via Amazon India. To pre-book, users will have to buy an Amazon e-Gift Card, which will then be redeemed against the OnePlus 6T when it becomes available for users. OnePlus has also detailed freebies that users will get alongside. Pre-bookings began at 12pm IST on Tuesday, October 9.

Here's how you can pre-book the OnePlus 6T on Amazon India. Visit the dedicated pre-bookings page, and follow the instructions to buy an Amazon Pay Email Gift Card. Be careful to select the OnePlus 6T 'Design', and choose the Rs. 1,000 denomination. Once purchased, the gift card will then be sent to you via email. The gift card can then be redeemed on November 2 or November 3. The e-commerce retailer has also revealed that sales will start at 12pm IST (Noon) on November 2.

As for the freebies, Rs. 500 cashback will be credited to your Amazon Pay account by November 6, while users will get a coupon code to purchase the OnePlus Type-C Bullet Earphones (worth Rs. 1,490) in their email by November 15. This coupon code can be redeemed against the earphones on Amazon India, making the purchase free of cost. Pre-bookings are also open via Croma outlets and OnePlus exclusive offline stores.

As per previous reports, OnePlus 6T is tipped to feature a 6.4-inch Optic AMOLED full-HD+ display and a Qualcomm Snapdragon 845 SoC, coupled with 6GB and 8GB RAM options and up to 256GB of onboard storage. Moreover, the OnePlus 6T is expected to run Android 9.0 Pie out-of-the-box.