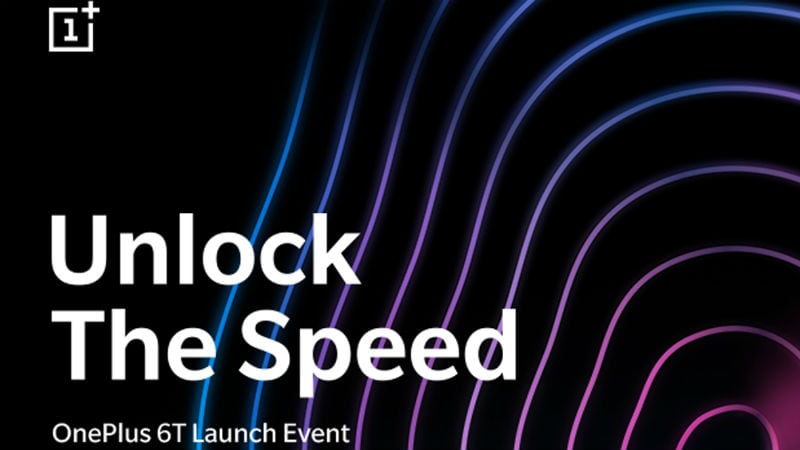 The OnePlus 6T's global launch is also expected on October 30

OnePlus 6T is set to be unveiled in India on October 30. The mobile maker on Monday announced the launch date of its latest flagship. The company has sent out media invites for a launch event scheduled in New Delhi, where it will release the OnePlus 6T. Notably, OnePlus fans will also be able to buy invites for the event soon. Interestingly, the global launch for the OnePlus 6T also seems to coincide with the smartphone's launch in India. As always, OnePlus has already teased several features of the upcoming handset, while a number of leaks and rumours have hinted at some of the specifications of the smartphone.

The launch event invite sent by OnePlus shows off the new tagline 'Unlock The Speed' most likely pointing towards the presence of an in-display fingerprint sensor. The company has noted that the OnePlus 6T will be unveiled at KDJW Stadium (inside Indira Gandhi Stadium Complex) in New Delhi on October 30. Notably, the event will start at 8:30pm on that day. Meanwhile, OnePlus fans will be able to buy the invites for the smartphone's launch event via the company's website. Notably,
the invite sales will begin at 10:00am IST on October 17, priced at Rs. 999.

OnePlus says, "At the centre of this milestone event will be the global OnePlus Community who continues to help build and shape the direction of OnePlus. Together, we will celebrate the announcement of the OnePlus 6T by hosting the biggest ever Community event in its history." It is also worth noting that OnePlus will also be live-streaming the launch event on its website. Meanwhile, a 'Notify me' page for pre-registration of OnePlus 6T is already live on Amazon.in, the exclusive online sales partner for OnePlus.

Coming to the global launch OnePlus 6T, the company on its Twitter account posted a teaser alongside the caption "The #OnePlus6T is coming. Unlock The Speed on October 30." The video mentions that the smartphone will also launch in New York City on October 30 as well - at 11am EDT - which is the same time as 8:30pm IST, implying the event will occur simultaneously.

As per previous reports, OnePlus 6T is tipped to feature a 6.4-inch Optic AMOLED full-HD+ display and a Qualcomm Snapdragon 845 SoC, coupled with 6GB and 8GB RAM options and up to 256GB of onboard storage. The smartphone is also reported to have a 3,700mAh battery that will be larger in capacity over the 3,300mAh battery available on the OnePlus 6. Moreover, the OnePlus 6T is expected to run Android 9.0 Pie out-of-the-box.

As for what the company has confirmed, the OnePlus 6T will feature an in-display fingerprint sensor that it calls Screen Unlock, apart from revealing it will forego the 3.5mm headphone jack for a USB Type-C port. The company also confirmed it won't support wireless charging, or offer an IP rating despite being water resistant to some extent.

Honor 8X Said to Be an Amazon-Exclusive Offering in India, Price Tipped