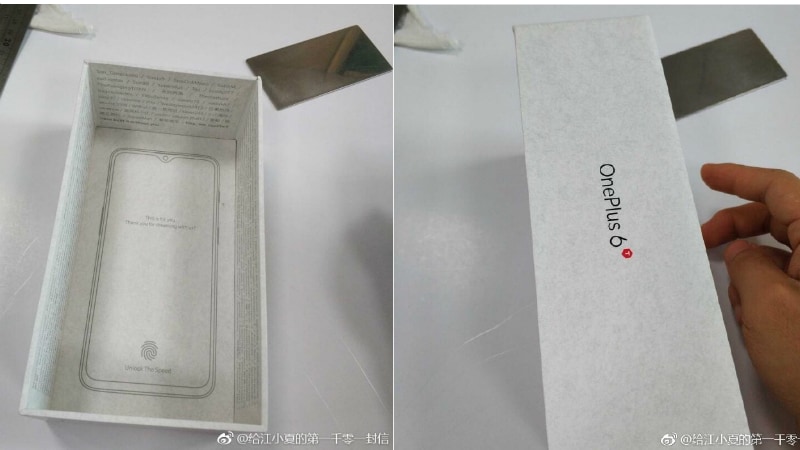 OnePlus 6T is supposed to be the successor of the flagship OnePlus 6, if trends from past couple of years are a yardstick to go by. Alleged photos showing the upcoming OnePlus 6T smartphone's packaging and retail box have been outed, showing an outline of the new model's design - key design elements revealed from the outline include a waterdrop-style display notch and an in-display fingerprint sensor. The rumour mill has been churning out information on the OnePlus 6T much more recently considering a report suggested that the phone might be launched as soon as October 2018. Let's get into the details of the recent leak.

The images of the retail box and its contents were posted on Weibo, spotted on SlashLeaks. The leaked retail box also shows the phrase "Unlock the speed" on one of the edges. As expected, the OnePlus 6T will seemingly take inspiration from Oppo's next-gen series of smartphone offerings. In August this year, Oppo unveiled two smartphones in its portfolio - Oppo R17, Oppo R17 Pro - both of which sport a similar display notch and an in-display fingerprint sensor.

Similar to an accelerated release schedule of the OnePlus 6 in May this year, the OnePlus 6T is also expected to come to markets early in October, exclusive to T-Mobile in the US. Price of the handset is expected to go up to $550 (roughly Rs. 39,300), continuing the brand's strategy of increasing the base price with every generation of their flagship.

To recall, the OnePlus 6T was also allegedly spotted on EEC (Eurasian Economic Commission's) portal in Russia where it got certified under the model number A6013. The OnePlus 6 was previously certified as A6000, leading us to believe that this might be the OnePlus 6T.