OnePlus 6 launch is just around the corner as the Chinese phone maker prepares to unveil the smartphone in London on May 16 and in India and China on May 17. But that hasn't stopped partners from 'accidentally' leaking specifications and design elements of the flagship smartphone. In the latest round, the OnePlus 6 has been spotted on HDFC Bank's SmartBuy Offers portal with the listing revealing nearly complete specifications and possible design renders. OnePlus 6 will replace the OnePlus 5T as the company's flagship, and will compete against the likes of Samsung Galaxy S9, iPhone 8, and other premium handsets.

In a listing page on HDFC Bank's offers website, the OnePlus 6 has been shown to sport a rather wider notch than previously confirmed by the company. In fact, the notch shown in the render is similar to the one seen on the iPhone X. The handset was shown as "out of stock" at press time. 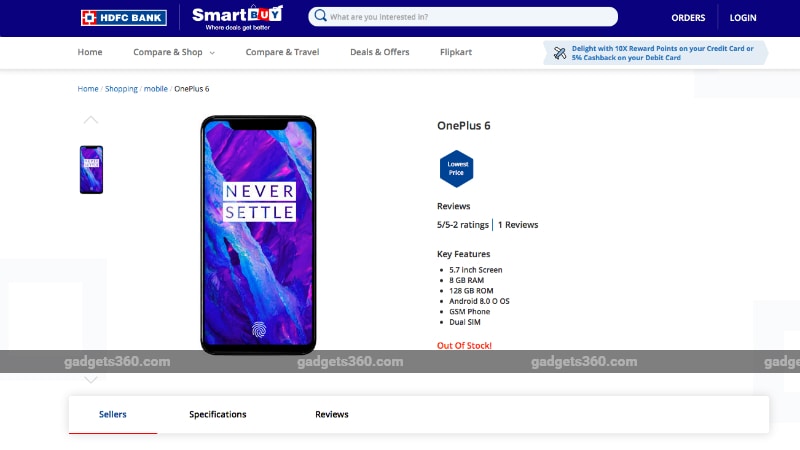 In terms of specifications, the OnePlus 6 is said to sport a 5.7-inch Super AMOLED display, a Qualcomm Snapdragon 845 SoC, 8GB of RAM, and 128GB of inbuilt storage. Additionally, the GSM-based phone will run Android 8.0 Oreo and support two SIM cards.

Interestingly, the listing suggests that the OnePlus 6's display will have a resolution of 1800x3200 pixels giving it an aspect ratio of 16:9, which might be inaccurate considering the phone is expected to sport a display with at least 18:9 aspect ratio. As for camera specifications, the listing, notably, mentions a single 23-megapixel rear sensor (with dual LED flash) and a dual setup on the front with two 16-megapixel sensors.

Connectivity options include 4G VoLTE, Wi-Fi with hotspot, Bluetooth 5.0, USB Type-C, NFC, and GPS. Sensors onboard the OnePlus 6, as per the listing, include accelerometer, ambient light sensor, fingerprint sensor, gyroscope, and proximity sensor. There is expected to be a 3500mAh battery under the hood, with Dash Charge support.