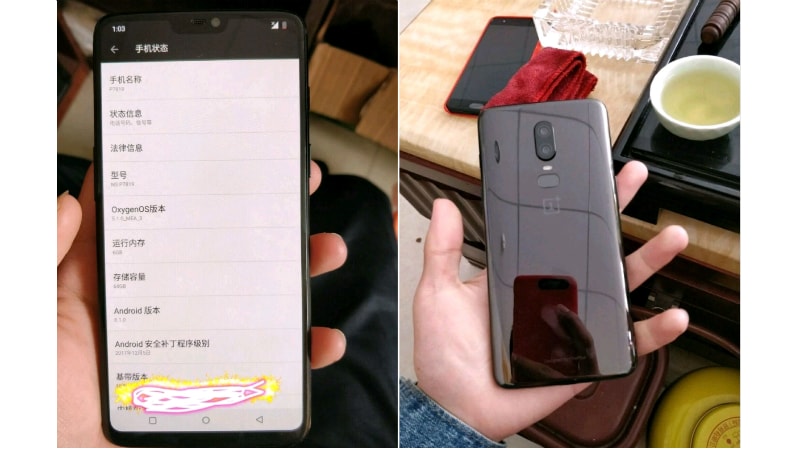 While we saw a mid-yearly upgrade with the OnePlus 5T, the OnePlus 5 is due to get a major redesign in June this year. There are still several weeks to go before the official unveiling but that hasn't stopped the leaks and rumours from surfacing online. In the latest leak, the supposed OnePlus 6 has been spotted with an edge-to-edge display and an iPhone X-like notch on top. The leaked OnePlus 6 images also reveal a vertical dual rear camera setup on the back of the handset.

Chinese technology blog ITHome on Tuesday posted snapshots of what is claimed to be the yet-to-be-launched OnePlus 6 flagship smartphone. From the first look, this phone sports a glass body design and a bezel-less display. What's interesting is that it seems to have borrowed the "notch" design from the iPhone X, possibly to incorporate the selfie camera and face unlock sensors. Apart from that, it has a vertical dual camera setup at the back, with a fingerprint sensor and the OnePlus logo right below.

The report suggests the supposed OnePlus 6 - with model number P7819 - will come with specifications such as 6GB RAM, 64GB inbuilt storage, and Android 8.1 Oreo. However, these are unconfirmed reports and need to be taken with a pinch of salt; there are still several days to go before we might see renders from authentic sources. We can expect the phone to be powered by the latest Qualcomm Snapdragon 845 SoC, keeping in mind the company's statement made on the sidelines of CES this year.

OnePlus CEO Pete Lau had confirmed in January that the company's next flagship would be launched in the latter part of Q2 2018, which suggests the phone might be launched before June end. Interestingly, Lau also said that the launch of a mid-year upgrade (OnePlus 6T?) is not 100 percent confirmed, hinting at a change in strategy.