OnePlus 6 to Launch in China on May 17, Company Reveals 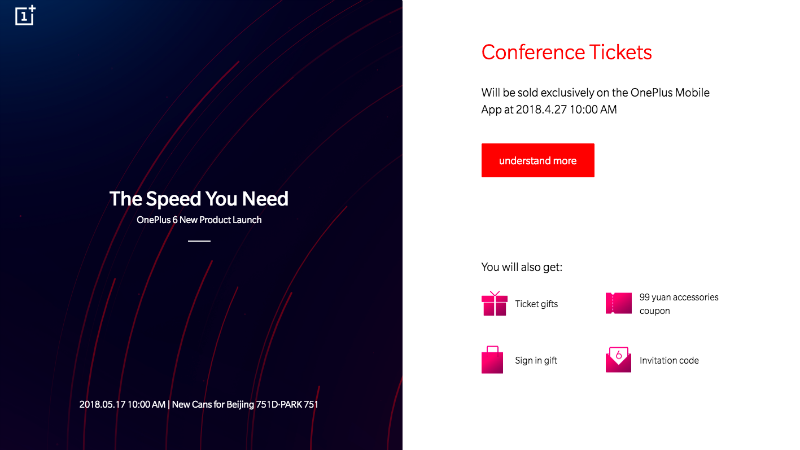 OnePlus 6 launch date has been officially confirmed by the brand, with the company's China website giving details of the event. The OnePlus 6 launch event will be held on May 17 at 10am CST (7:30am IST) in Beijing, China. The event will be open to the public and fans need to pay a fee of CNY 99 (roughly Rs. 1,000) to attend the launch. This development comes within a week of OnePlus's exclusive partner Amazon India confirming the OnePlus 6 India launch will be "soon," and putting up a dedicated web page for the handset; also the OnePlus 5T has gone out of stock in India ahead of the unveiling.

Update: OnePlus 6 will launch in India hours after the China event, at 3pm IST on May 17.

One of the most highly anticipated smartphones because of its high-end hardware and relatively affordable price tag, the OnePlus 6 is being promoted with the tagline "The Speed You Need." This likely alludes to the Snapdragon 845 SoC and 8GB RAM.

Interestingly, the OnePlus 6 release date may also been leaked. A report by GSMArena cites a reader who claims that OnePlus has sent emails to OnePlus phone owners that the upcoming flagship will be launched on May 21. Apparently the reader has been selected for trial as part of the company's new Lab programme started last week. The report states that the email sent out to selected testers includes all terms and conditions as well as the launch.

As for confirmed specifications, the OnePlus 6 will get a Qualcomm Snapdragon 845 SoC, 8GB of RAM, and a 256GB inbuilt storage variant. Apart from that, the phone will sport a display notch - to incorporate the front camera and other sensors, a 3.5mm headphone jack, and a glass back design.

Talking about rumours, however, we can expect wireless charging to be part of the package, along with a bigger battery than the one on the OnePlus 5T. Additionally, the OnePlus 6 might sport a 6.28-inch full-HD+ (1080x2160 pixels) display with an 18:9 aspect ratio.