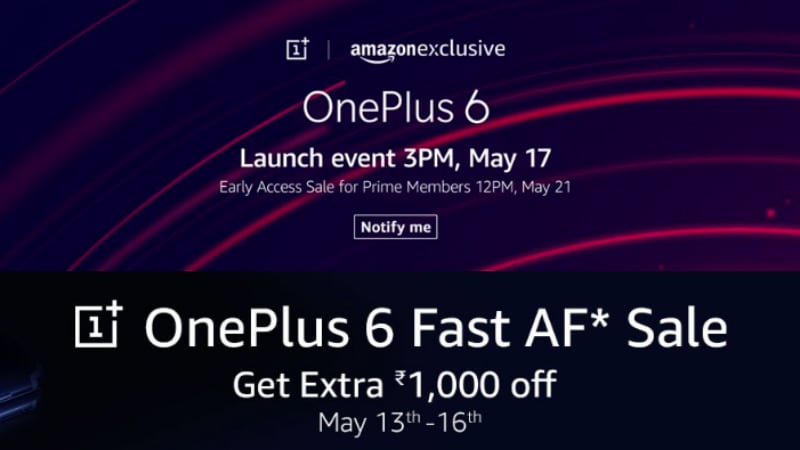 OnePlus 6 is coming to India on May 17, when the smartphone will be unveiled at a launch event in Mumbai at the NSCI Dome. Now, to allow fans to get their hands on a unit of the OnePlus 6, the company has announced its Fast AF (Fast And First) sale that will be held via Amazon India between May 13 and May 16. As part of the sale, users will be able to buy Amazon e-gift cards that can be used to purchase the OnePlus 6 on May 21 and May 22.

An extended warranty of 3 months will be provided to successful buyers. May 21 is also the date of the Prime Early Access Sale for the OnePlus 6, Amazon India has revealed.

To become one of the first buyers of the OnePlus 6 globally, users can purchase a Rs. 1,000 OnePlus 6 Amazon.in e-gift card between May 13 and May 16. Once bought, users can redeem the gift card to purchase a OnePlus 6 on sale dates May 21 and May 22. Additionally, a complimentary Amazon Pay cashback of Rs. 1,000 will also be provided to eligible users. As mentioned earlier, the offer also entitles buyers to an extended manufacturer warranty of 3 months over and above the standard 1 year warranty on the OnePlus 6.

Commenting on this, Vikas Agarwal, General Manager, OnePlus India said, "In a yet another community first initiative, we are excited to introduce our first ever 'Fast AF' Sale that offers unparalleled benefits and an assured opportunity to be among the first few to own our latest flagship globally."

Noor Patel, Director, Category Management, Amazon India said, "Both, Amazon and OnePlus have always maintained a customer-first approach. With this unique, one-of-a-kind sale, customers are in for a special treat on the much awaited OnePlus 6 exclusively on Amazon.in."

Just recently, OnePlus had announced that its upcoming OnePlus 6 would receive an Android P Beta starting May 16. The Developer Preview 2 of Google's latest major mobile OS upgrade was released at its annual Google I/O developer conference in California.

OnePlus 6 is confirmed to come with a Qualcomm Snapdragon 845 SoC, up to 8GB of RAM, up to 256GB of inbuilt storage, a display notch, and a 3.5mm headphone jack. While pricing has not yet been confirmed, leaks suggest that OnePlus 6 price in India for the 64GB storage variant could be Rs. 36,999, while the 128GB variant will cost Rs. 39,999.