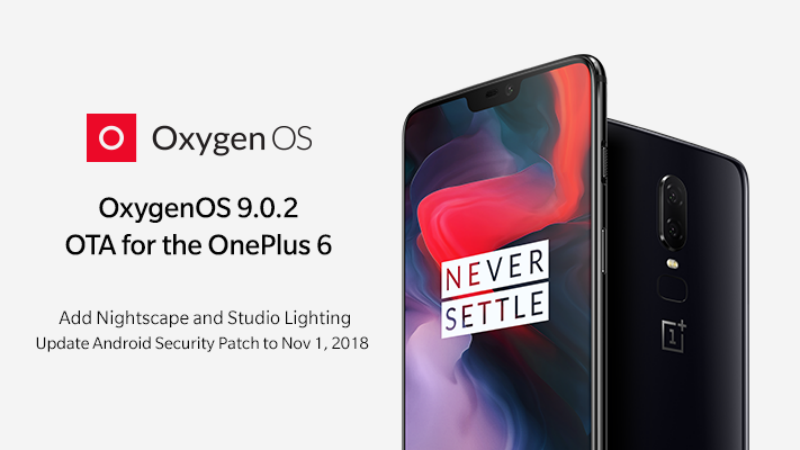 OnePlus 6 is getting OxygenOS 9.0.2 a couple of days after receiving the new OxygenOS Open Beta 6 update

OnePlus 6 has started receiving OxygenOS 9.0.2 that brings a bunch of features recently debuted along with the OnePlus 6T. The new OxygenOS update comes just a couple of days after OnePlus released the OxygenOS Open Beta 6 for the OnePlus 6. It includes features such as Nightscape mode, Studio Lighting and the new navigation gesture system that all arrived on the OnePlus 6T earlier this week. The latest update for the OnePlus 6 also brings the November Android security patch to fix all the known vulnerabilities.

Among other changes, as specified in an official forum post, the OxygenOS 9.0.2 for the OnePlus 6 brings the Nightscape mode and Studio Lighting. The Nightscape mode is specifically designed to help users capture low-light shots with improved clarity, less noise, and more accurate colour reproduction as well as a better dynamic range than what was available through the default camera app previously. In contrast, the Studio Lighting mode is aimed to recognise faces and adjust the lighting accordingly. This sounds similar to the Portrait Lighting feature offered by Apple on its newer iPhone models. Moreover, both Nightscape and Studio Lighting come preloaded on the OnePlus 6T.

The experience through the Nightscape and Studio Lighting features on the OnePlus 6 is likely to be identical to what's already available on the OnePlus 6T since both handsets have the same optics.

Apart from the new camera enhancements, the OxygenOS 9.0.2 update includes new navigation gestures that were originally designed for the OnePlus 6T. There is also an improved interface for the About phone section as well as optimised standby power consumption. OnePlus has also provided support to launch Google Assistant or any third-party assistant app by holding the power button for 0.5 seconds. This works similar to how one can activate Siri on the iPhone X and later models. Also, the feature to enable Google Assistant by holding the power button was previously provided on the OnePlus 6T. The latest OxygenOS update additionally includes the November Android security patch and has a list of general bug fixes and improvements.

OnePlus 6T vs OnePlus 6: Here's Everything That's New and Different

Being an incremental rollout, the OxygenOS 9.0.2 for the OnePlus 6 will initially reach a limited number of users, though it will have a broader rollout in a few days "after making sure there are no critical bugs". This is something similar to what the company has done in the past as well.

Having said that, you can manually check the availability of the latest OxygenOS update by going to Settings > System updates.

Earlier this week, OnePlus released the new OxygenOS Open Beta 6 for the OnePlus 6 that brought features such as the Nightscape mode, Studio Lighting, and new navigation gestures. The Chinese company also brought OxygenOS 9.0.4 for the OnePlus 6T that included the November Android security patch, improvements to the Nightscape mode, and added the Studio Lighting feature to the camera app.