OnePlus 6 has already become one of the most teased smartphones of the year - thanks to the tons of teasers that OnePlus publicly circulated so far. And now, the OnePlus 6 has been spotted in a live image that shows the front of the smartphone as well as the already confirmed notch design as well as a thin-bezel display. The latest development comes just after the company formally announced the OnePlus 6 launch date for the global as well as India and China regions. Also, the leaked image matches perfectly with the renders that surfaced in the recent past.

The image, courtesy iGyaan, is apparently a fresh one as it sports a date stamp of April 23. It doesn't detail the design of the OnePlus 6 due to the presence of a special case that is purposefully hiding the outer frame. Nevertheless, the leaked image shows the wallpaper of the OnePlus 6 alongside the instances of Android 8.1 Oreo that can be seen from the status bar, icons, and the on-screen buttons. The smartphone also sports the "Never Settle" company motto. Besides, you can see the notch that the company already confirmed formally. It will have a room for an earpiece and front-facing camera sensor and include an ambient light sensor and proximity sensor. The placement of the cut-outs don't give much indication as to where the hardware Alert slider has moved. 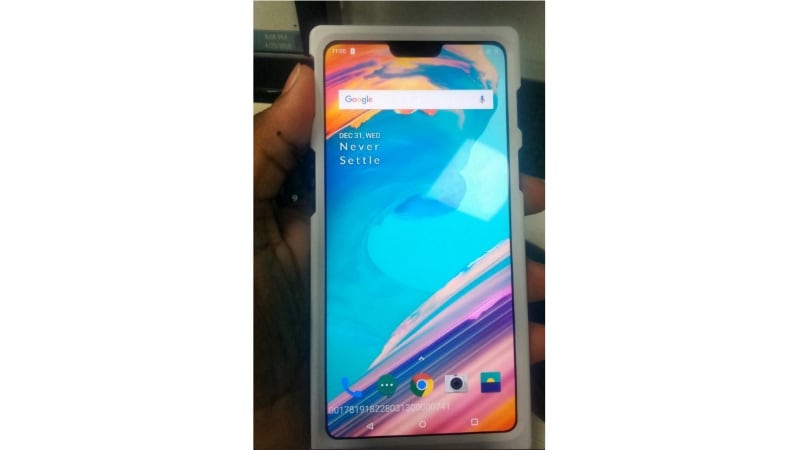 As per some of the latest revelations made officially, the OnePlus 6 will come with a glass back and is expected to feature a water-resistant build. The smartphone is also likely to include a Snapdragon 845 SoC, paired with 8GB of RAM, and feature up to 256GB of onboard storage. Additionally, there are speculations that the next-generation smartphone will have a 'Slide to Focus' option and a larger, 3450mAh battery. The company has also tied-up with Marvel Studios to launch a OnePlus 6 x Marvel Avengers Limited Edition in India.

The India launch of the OnePlus 6 is set for May 17, the same day when the handset will debut in China. However, the global event is scheduled in London for May 16.