The OnePlus 6 launch event has officially kicked off, with founder Carl Pei taking the stage to introduce the smartphone that will compete with iPhone X, Samsung Galaxy S9 Plus, and their ilk. Pei started his keynote with a recap of the company's achievements, and then moved on to the first product the brand is unveiling tonight - the Bullets Wireless earphones - followed by the OnePlus 6. The launch event is being held in London, where the covers will be taken off the phone for the first time. After this will be two more events — one in China and the other in India. In India, the smartphone goes on sale starting May 21 via pop-up stores as well as Amazon, the company’s official partner. We will keep updating this page in order to bring to you all the updates as they are announced, so stay tuned with us.

OnePlus 6 sports an all-glass design for the first time - the company's handsets have previously used sandstone material, ceramic, and metal. Pei says the Mirror Black colour option's glass back is "just as resilient as any of other our previous phones" thanks to the Gorilla Glass 5 protection. The Midnight Black version is made of glass but features a matte finish, while the Silk White colour option will be released "in a few weeks" as a limited edition handset. The OnePlus 6 release date for the Midnight Black and Mirror Black variants will be May 22, while the Silk White option will hit the market on June 5.

The smartphone has a 6.28-inch full-HD+ display with an 19:9 aspect ratio, with a notch inspired by the iPhone X above the display. OnePlus 6 is powered by the Snapdragon 845 flagship SoC, and retains the 3.5mm audio jack. OnePlus has also confirmed it will come with up to 8GB RAM and up to 256GB storage. There's a vertically-aligned dual rear camera setup, with a 20-megapixel primary sensor and a 16-megapixel secondary sensor. On the front, it is has a 16-megapixel selfie camera. The OnePlus 6 camera has received a few upgrades too, such as improved lowlight photography capabilities, better Portrait Mode effects (including on the front camera soon), slow-mo videos, and a video editor feature.

Further, the OnePlus is backed by a 3300mAh Dash Charge-compatible battery, Face Unlock, and fingerprint sensor. Dimensions of the OnePlus 6 are rumoured at 155.7x75.4x7.8mm and it is said to weigh 177 grams. The Android 8.1 Oreo-based smartphone has the OxygenOS custom UI, and will get Android P Beta for users to sideload starting tonight. 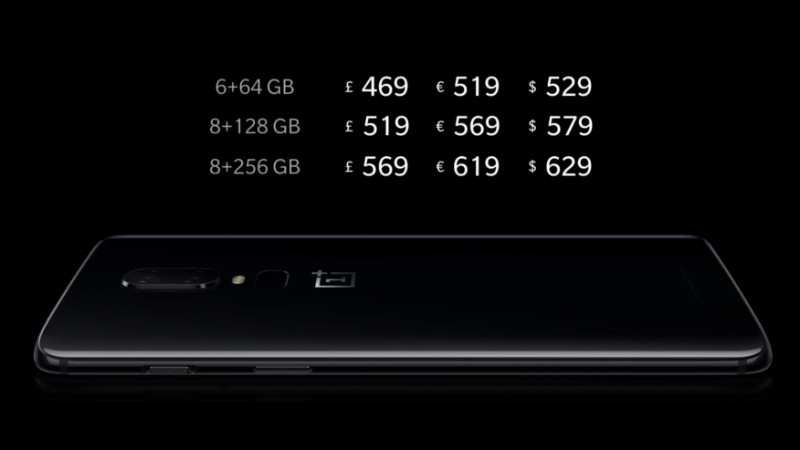 The OnePlus 6 price in India will be revealed at the event the company is hosting tomorrow at 3pm in Mumbai. However, it starts at Rs. 36,999 for the variant with 64GB storage, according to a report. The 128GB storage variant is said to cost Rs. 39,999, while the OnePlus 6 price in India for the 256GB variant has not been revealed yet. The smartphone goes on sale in India on May 21 via pop-up stores the company will setup in Mumbai, Pune, Chennai, Hyderabad, New Delhi, Kolkata, and Ahmedabad, as well as from the OnePlus Experience Store in Bengaluru.

When it comes to online channels, The OnePlus 6 is an Amazon exclusive in India, and will be up for grabs from the e-commerce website with a number of deals. First up is the Fast AF (And First) sale, under which users need to buy a Rs. 1,000 gift card from Amazon between May 13 and May 16 and redeem it on May 21-22 while buying the OnePlus 6. This will give the buyers complimentary 3 month additional warranty (above the standard 1-year warranty), along with Rs. 1,000 cashback in the form of Amazon Pay balance.

The launch offers being provided by Amazon Include a Rs. 2,000 discount on purchases made using SBI credit and debit cards, no-cost EMIs for up to 3 months through all major banks, OnePlus is additionally giving all OnePlus 6 buyers complimentary 12-month accidental damage insurance by Servify, an Amazon Prime Video gift card worth Rs. 250, and discounts up to Rs. 500 for purchasing ebooks via Amazon Kindle. Idea subscribers picking up the OnePlus 6 will get a Rs. 2,000 worth of cashback and a dedicated device insurance. Besides, benefits up to Rs. 25,000 will be available on flight and hotel bookings from ClearTrip.

The new Bullet Wireless earphones come with Google Assistant integration, and turn on and resume playing the music when you separate the magnetic earphones from each other. They also support fast-charging (via USB Type-C), and will deliver life of up to 5 hours on a charge of 10 minutes. The earphones are priced at EUR 69 in Europe, and $69 in the US.