OnePlus is all set to launch its newest flagship on May 17 in India (and May 16 in London). Running up to the launch, the OnePlus 6 has been leaked extensively and it is expected to be powered by a Snapdragon 845 SoC, sport a bezel-less display, and come with a dual camera setup. New hands-on images have now surfaced on the Web, and it shows the OnePlus 6 with the display switched on, and has also been compared with the iPhone X.

The OnePlus 6 is seen sporting a bezel-less display, something that the company confirmed when it announced it would embrace the notch. These photos, shared by Techtastic from Chinese social media site Baidu, compare the OnePlus 6 with the iPhone X. The smartphone is visibly larger than the iPhone X, but the display is uncannily similar. The notch at the top of the display houses the sensors, just like the Apple variant, but it's less wide. There's little clarity on how the extra real estate will be utilised on the Android device, but the company will demo that presumably at the event. 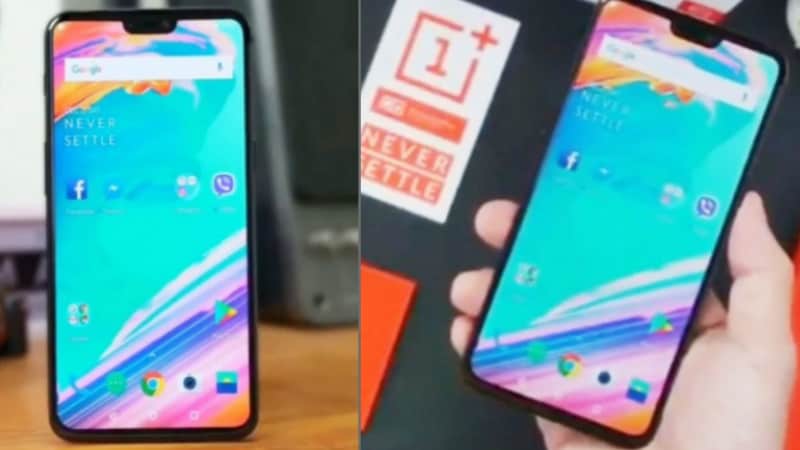 If rumours are to be believed, the OnePlus 6 will come with a 19:9 display, which is rumoured to come in 6.28-inch size and features full-HD+ (1080x2160 pixels) resolution. The smartphone will be powered by a Qualcomm Snapdragon 845 SoC, coupled with 8GB of RAM. It is also rumoured to have a vertically placed dual rear camera setup, rear-mounted fingerprint sensor, a 3450mAh battery, and could run a new version of OxygenOS with Android 8.1 Oreo on top. Furthermore, OnePlus has partnered with Marvel Studios to launch a OnePlus 6 x Marvel Avengers Limited Edition variant.

Some past rumours claimed that the OnePlus 6 will go on sale in the country with a starting price of Rs. 36,999 for the 64GB storage variant, while its 128GB variant will be available at Rs. 39,999. The smartphone will also come with a 256GB storage option, though its price is yet to be revealed.

OnePlus will host pop-up events across eight Indian cities between May 21 and May 22 to let fans experience and purchase the new flagship before its general open sales that will take place in the country exclusively via Amazon India. The OnePlus smartphone will notably be available for purchase through the pop-up stores on the first-come-first-serve basis and similar events will be held on the same schedule in the New York, London, Paris, Milan, and Beijing for global OnePlus fans.

Further reading: OnePlus, OnePlus 6, OnePlus 6 Specifications, Mobiles, Android
Tasneem Akolawala Email Tasneem Tasneem Akolawala is a Senior Reporter for Gadgets 360. Her reporting expertise encompasses smartphones, wearables, apps, social media, and the overall tech industry. She reports out of Mumbai, and also writes about the ups and downs in the Indian telecom sector. Tasneem can be reached on Twitter at @MuteRiot, and leads, tips, and releases can be sent to tasneema@ndtv.com. More
Snapchat Attempts to Fix Controversial Redesign by Moving Stories from Friends to Discover
Battlefield 1: They Shall Not Pass Expansion Free on Xbox One and Windows PC