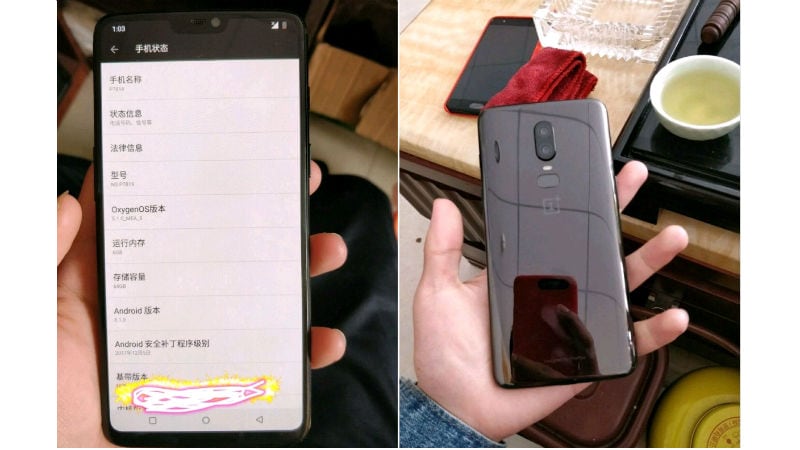 Unlike other smartphones' 18:9 displays, OnePlus 6 is said to feature a 19:9 aspect ratio

OnePlus 6 may soon be unveiled as the Chinese brand's latest smartphone as several rumours have already started surfacing online. While we saw a mid-yearly upgrade with the OnePlus 5T in 2017, the OnePlus 5 is due to get a major redesign by June, and this model can be expected to be called the OnePlus 6. Interestingly, OnePlus 6 could be one of the many smartphones which are expected to come with an iPhone X-like notch. While previous image leaks had suggested some of the features in the handset, a new report has revealed more information about the upcoming smartphone, including screenshots and benchmark scores.

As per Android Central, a source familiar with OnePlus' plan has claimed that the OnePlus 6 will have an iPhone X-like display notch and pack some high-end specifications, including the Snapdragon 845 processor. Additionally, the leaked screenshots showcase a large status bar, further confirming the notch. Also, the OnePlus 6 is expected to have a display with 19:9 aspect ratio, taller than the 18:9 panel of the OnePlus 5T. The new aspect ratio essentially makes up for the space lost by the notch.

According to the leaked images, the prototype OnePlus 6, with the model number A6000, scored 2,76,510 in the AnTuTu benchmark. The benchmark score beats every Android smartphone, which could mean that the OnePlus 6 could come with the Snapdragon 845 SoC. This is not surprising, as OnePlus CEO Pete Lau in January had announced that the next flagship phone from OnePlus will be powered by the new processor. This adds to a previous report, which had revealed specs like 6GB RAM, 64GB inbuilt storage, Android 8.1 Oreo, and a vertical dual-camera setup.

Notably, Lau had confirmed earlier that the company's next flagship would be launched in the latter part of Q2 2018, which suggests the phone might be launched before June end. It is important to take the leaks with a pinch of salt, but we will likely be hearing a lot more about this smartphone in the next few months.