All India-specific features were exclusively developed at OnePlus’ R&D centre in Hyderabad.

At the India launch of the OnePlus 7 Pro, Szymon Kopec, Product Lead at OnePlus, announced that OxygenOS will be getting a few extra features especially for India via a software update in the near future. Gadgets 360 was privy to this information during a briefing session held a few weeks before the phone's launch and we can now finally talk about it. The India-specific features will be rolling out in the Open Beta build of OxygenOS at the end of June, first to the OnePlus 6 and OnePlus 6T smartphones. These features include Work-life Balance, a Smart SMS app, Caller Identification, OnePlus Roaming, and Cricket Scores. OnePlus states that the names of these features are not yet final and could change by the time it actually rolls out later in June.

Now, we must state that we haven't tried out these features ourselves as they are still a work in progress but we were given a brief on how they work and how it will look like on the users phone. 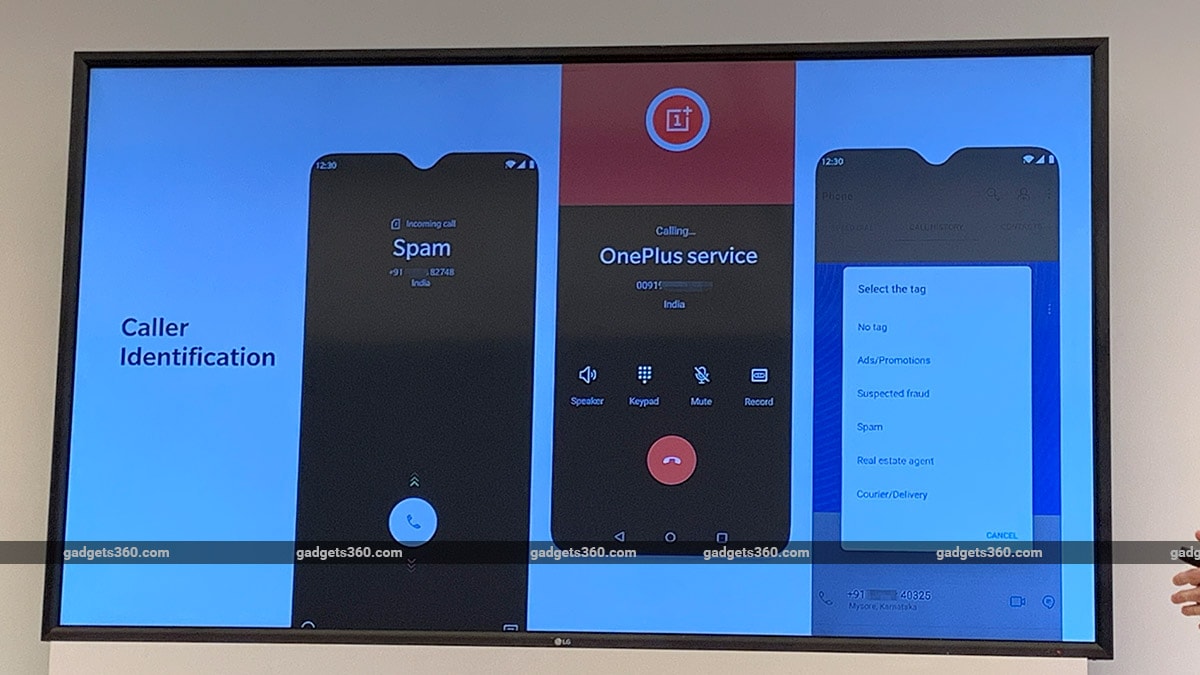 Caller Identification will be integrated into the dialler app, so you'll be able to identify unknown callers before answering the call. OnePlus says that it will be able to recognise and label spam calls from businesses and also legitimate calls from businesses, such as a service call from OnePlus service centre. You'll also be able to tag an unknown number as Spam, Real Estate Agent, Courier/Deliver, etc, which we're assuming would be crowdsourced to permanently classify that number as spam or a legitimate number, the way Truecaller does it. 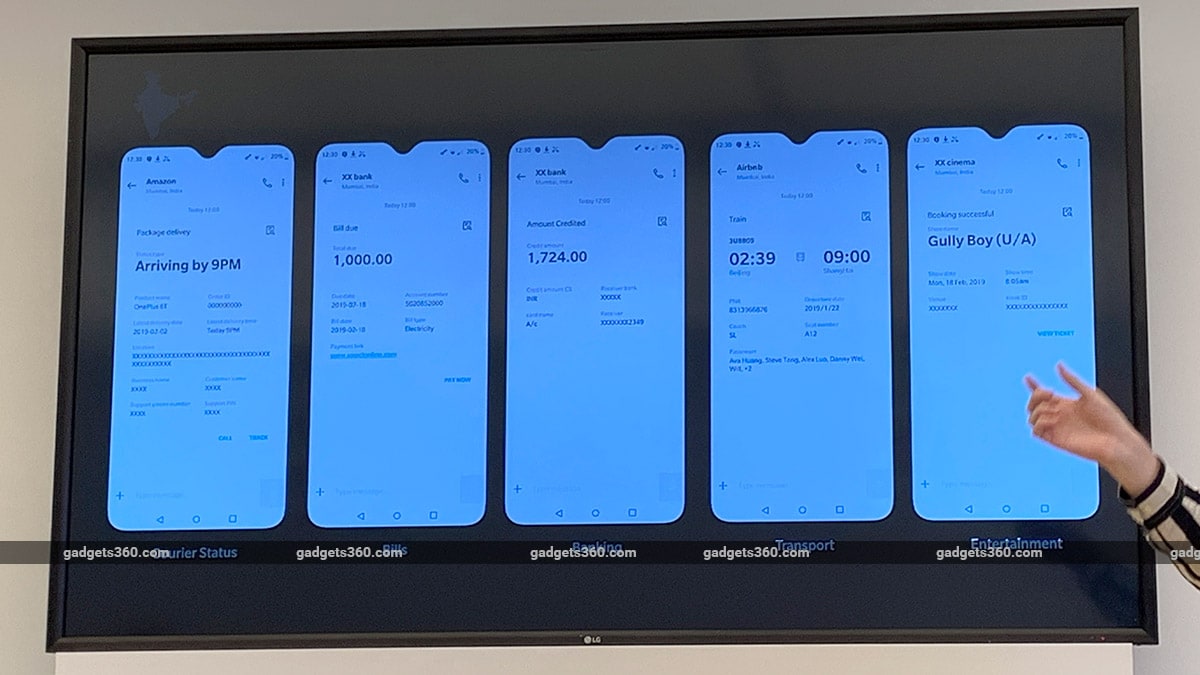 Next up is Smart SMS app, which will be able to detect the type of SMS and alter the way it's presented to you. OnePlus says it's currently identified 39 categories of service messages, ranging from courier status, bills, banking, transport, entertainment, etc. For instance, a movie ticket confirmation SMS will be formatted to clearly highlight the name of the movie, your seat number, venue, time, etc, while an SMS from a courier will have the ETA for the arrival and contextual buttons to track your package, etc. Apart from this, OTPs, transactions and promotion SMSes will be automatically grouped into separate categories within the app, so you don't mix them up with your personal messages. 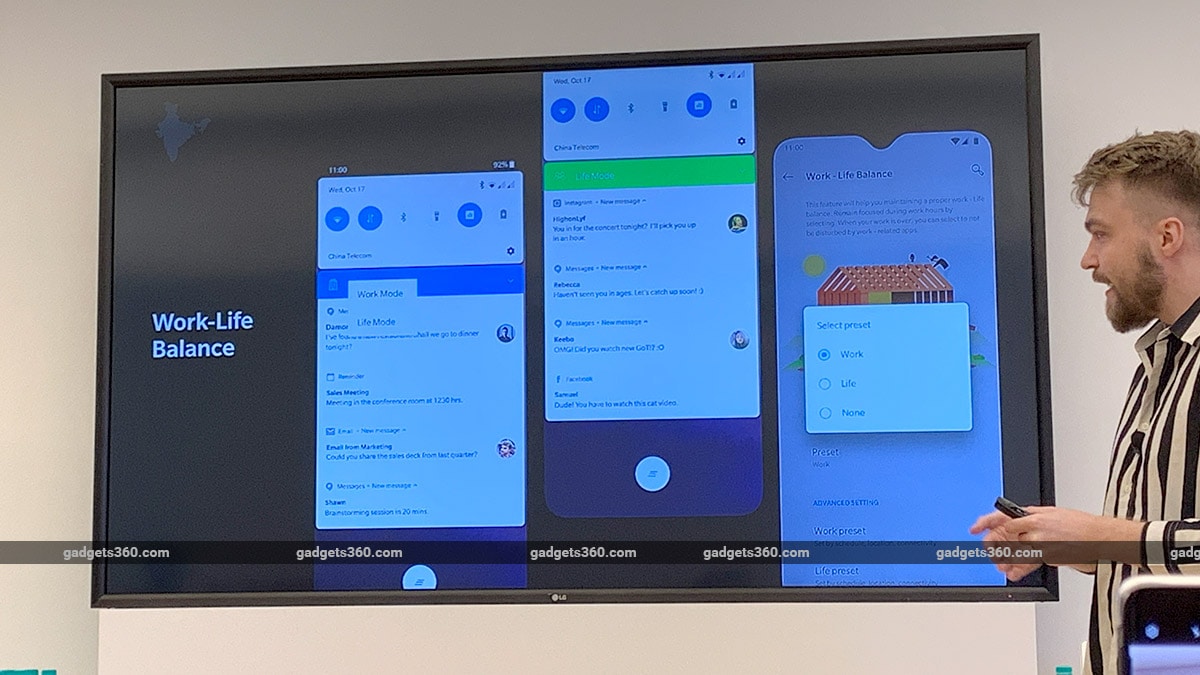 The Work-life Balance feature is an interesting one. It lets you set you work and leisure timings and also choose which apps should be blocked from sending notifications during that time. For instance, you can choose to block notifications from social apps during your workday and vice versa. It lets you create a Work and Life preset, where you select you apps, connectivity and timing for each group. You can also monitor how many hours you've actually spent on ‘work' or ‘life' apps with the help of a bar chart.

We don't much detail on how OnePlus Roaming actually works yet, but the principle seems to be similar to what Oppo and Realme have been offering in ColourOS, with ORoaming. This feature is said to offer affordable data packs when you travel abroad, in case you don't want to buy a local SIM card or use international roaming on your home number. It will show up as an option in the ‘Wi-Fi & Internet' sub-menu of the Settings app. 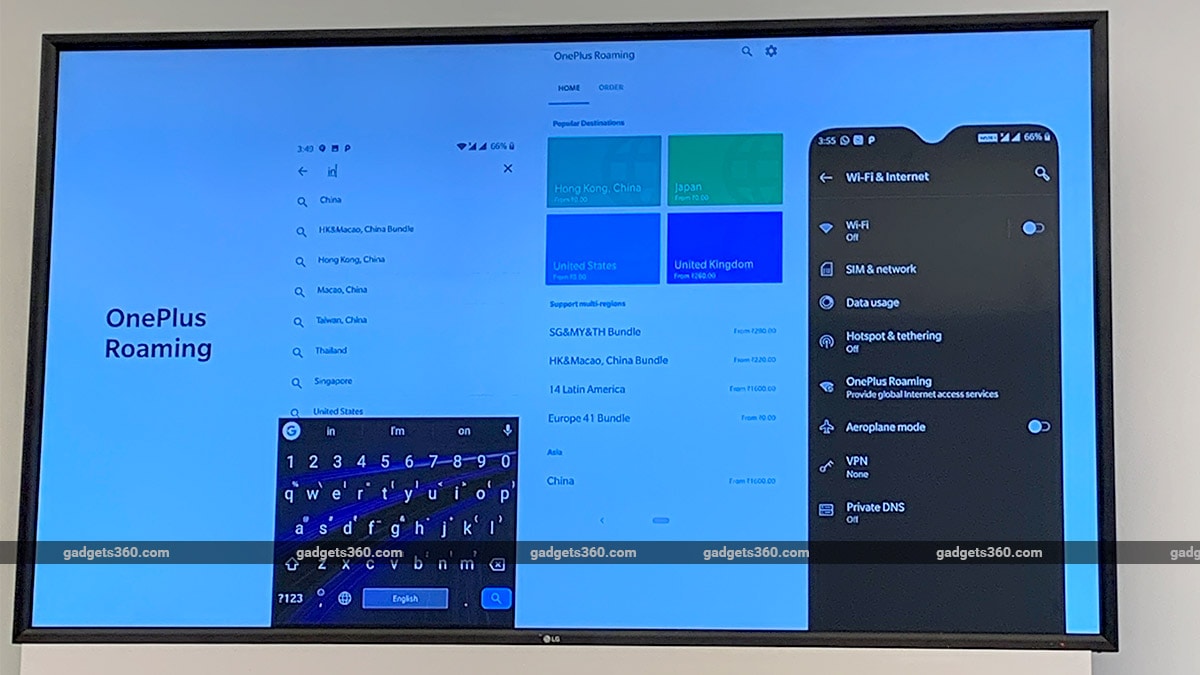 OnePlus Roaming will suggest data packs to consumers while roaming

Finally, there's Cricket Scores, which will be integrated into the Shelf, which is the left most screen on a OnePlus phone which also gives you shortcuts to your recent apps, weather etc. OnePlus has tied up with ESPNCricinfo for this feature, which will show you the current big cricket matches being played and you'll be able to follow the scores in real-time.

We can expect all of these features to roll out to the OnePlus 6 (Review) and OnePlus 6T (Review) in the Open Beta build of OxygenOS first, around June. There's no timeline on when this will arrive on the new OnePlus 7 and OnePlus 7 Pro (Review), but we're assuming it should take too long before they are available in the stable builds for all OnePlus smartphones.

Further reading: OnePlus, OxygenOS, OnePlus Open Beta, OnePlus 6, OnePlus 6T, OnePlus 7, OnePlus 7 Pro
Roydon Cerejo Email Roydon
Roydon Cerejo writes about smartphones and laptops for Gadgets 360, out of Mumbai. He is the Deputy Editor (Reviews) at Gadgets 360. He has frequently written about the smartphone and PC industry and also has an interest in photography. With over a decade of experience covering the consumer technology space, he is also an avid sci-fi movie and TV show geek and is always up for good horror flick. Roydon is available at roydon@gadgets360.com, so please send in your leads and tips. More
Redmi Note 7S Camera Samples Shared, Show 48-Megapixel Night Mode
Amazon Sees Police Complaint Filed for Hurting 'Hindu Sentiments' Over Pictures of Gods