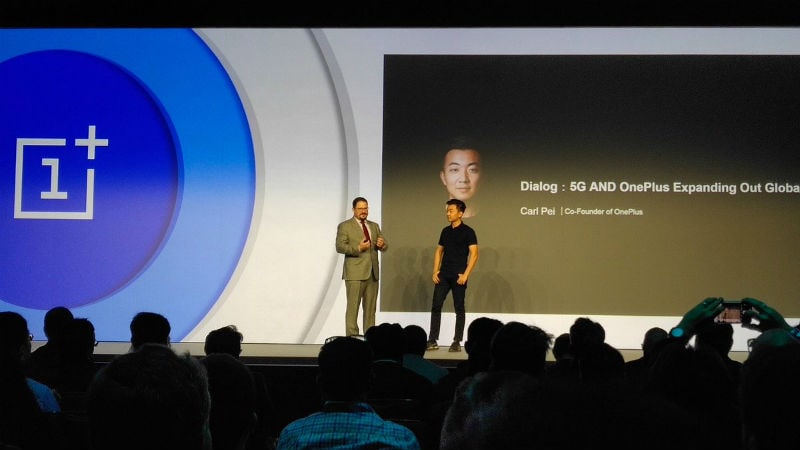 At 4G/5G Summit in Hong Kong, OnePlus' Carl Pei said that a 5G handset will arrive next year

OnePlus, just ahead of the release of OnePlus 6T, has revealed one of the headlining features of its 2019 flagship. At the Qualcomm 4G/5G Summit 2018 that is being held in Hong Kong, the Chinese mobile maker confirmed that it will launch a 5G smartphone next year. 5G connectivity seems ready to become mainstream in 2019, and OnePlus clearly wants to be one of the first handset manufacturers to introduce the feature in its phones. While the OnePlus 6T is set to launch in New York launch on October 29, the company's co-founder Carl Pei has already teased 2019's OnePlus 7 or OnePlus 7T. Also, chipmaker Qualcomm revealed that it is expecting the release of at least two major flagships with 5G connectivity.

During the Qualcomm 4G/5G Summit 2018, Qualcomm president Cristiano Amon and Carl Pei came together on stage to discuss their '5G leadership plans'. The OnePlus co-founder informed that the company will be releasing a 5G smartphone next year. It is worth mentioning that if a 5G phone from OnePlus arrives next year, it will be among the key tech companies that are bringing technology to reality. OnePlus will be competing against the likes of Samsung and Huawei, among others with its developments towards 5G connectivity that could get its final shape in the coming months. Pei revealed that his team had conducted a 5G test at Qualcomm's headquarters in San Diego in August this year.

Meanwhile, Qualcomm has also revealed some more details regarding the first wave of 5G Snapdragon handsets that would arrive in 2019. Qualcomm's Cristiano Amon during the same event said that the company expects the release of at least two flagship 5G smartphones next year. He said that one of the handsets may arrive in the first half of the year, and one in the second.

Companies such as Asus, Fujitsu, HMD Global, HTC, Inseego/ Novatel Wireless, LG, Motorola, NetComm Wireless, Netgear, OnePlus, Oppo, Sharp, Sierra Wireless, Sony Mobile, Telit, Vivo, WNC, and Xiaomi were announced to be "committed to 5G in 2019", with the Snapdragon X50 5G NR modem being used by them. Qualcomm added that 18-19 devices will be 5G ready in 2019.