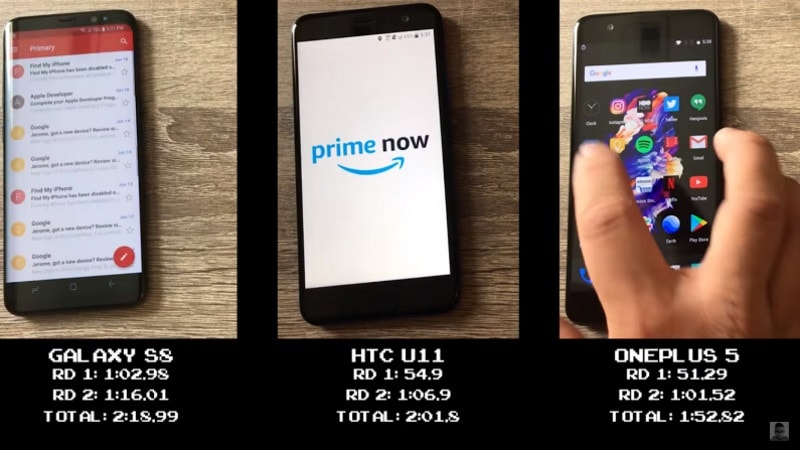 Shortly after the official launch of OnePlus 5 last week, the biggest story on the Internet was how the company was claimed to manipulate synthetic benchmark scores with its latest flagship smartphone by an investigative report. While the company's initial response to the matter was far from convincing, the latest real world speed test comparison has revealed that the OnePlus 5 might actually have the hardware that can back the company's tall claims to some degree. Separately, a Mint Gold colour variant of the smartphone has also been spotted getting clearance at a Chinese certification site.

In a speed comparison test video, posted on YouTube by Jeremy Ortega, OnePlus 5 can be seen outperforming other smartphones that also feature Snapdragon 835 SoC, i.e., HTC U11 and Samsung Galaxy S8. As a part of the performance test, Ortega launched 20 apps on all three smartphones, one after the other, in two successive rounds. While initial round shows the speed with which any app is launched for the first time, the second one shows the capability of the smartphone to launch an already opened app.

Notably, OnePlus 5 did not just manage to open all the apps faster than the other two smartphones under consideration, it managed to do so without breaking a sweat. The Samsung Galaxy S8 and HTC U11 smartphones managed to go through two test rounds in around 2 minutes 19 seconds and 2 minutes 2 seconds respectively. However, OnePlus 5 managed to go through both rounds in around 1 minute 53 seconds.

It is important to note that the OnePlus 5 used in the test featured 8GB of RAM while the Samsung Galaxy S8 and HTC U11 both packed 4GB of RAM each. The additional memory is likely to have impacted the performance of latest flagship by OnePlus but it also means that in real-world usage, the smartphone will manage to handle the daily tasks efficiently.

If we go by these results, OnePlus 5 seems to have taken its 'Flagship Killer' tag seriously. In our review of OnePlus 5, we said: "With Qualcomm's speedy processor and the slick new OxygenOS, system and app performance is excellent. The phone uses the ample RAM onboard to ensure things run smoothly. On average, we found around 3.9GB being used, leaving us with about 1.7GB on the 6GB model."

Finally moving to the other aspect of news, while the company has launched the OnePlus 5 in Midnight Black and Slate Gray colours, Mint Gold colour variant of the smartphone has now been spotted on Chinese certification website TENAA, as per a report by MySmartPrice. To recall, OnePlus 3T was previously offered in Soft Gold colour as well.