OnePlus 5 Price in India Leaked Yet Again Ahead of Launch 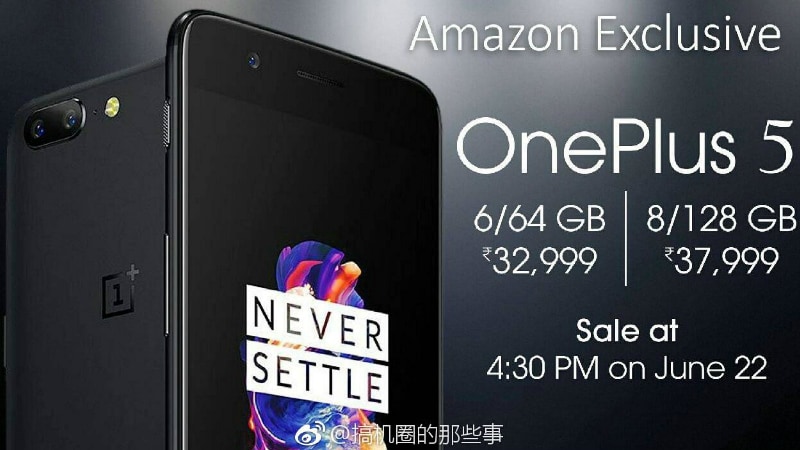 The OnePlus 5 launch is set for Tuesday, and the company has been dropping hints about the smartphone to keep the buzz around the handset going. The upcoming OnePlus smartphone is confirmed to be an Amazon India exclusive, sport dual camera setup at the back, and be powered by a Snapdragon 835 processor. Now, new intel from the Internet corroborates the pricing information leaked earlier, pretty much confirming the OnePlus 5 price in India.

The leak also suggests that the OnePlus 5 will be available on Amazon India at 4.30pm IST on on June 22 i.e. Thursday. In any case, we recommend you to take this information lightly, until the official details are unveiled at the launch event.

The upcoming OnePlus 5 seemingly sports an iPhone 7 Plus-like setup, which is likely to be the biggest highlight. A recent leak had suggested $479 (roughly Rs. 30,800) price in the US, while an earlier rumour had suggested the smartphone would cost around EUR 550 (roughly Rs. 39,900) in some European markets.

In a series of tweets, the global Twitter handle of OnePlus has also teased few more features like dual-SIM support on the OnePlus 5, and its fast charging capabilities. Carl Pei, OnePlus co-founder, also teased bokeh effect in an image said to be clicked with the OnePlus 5.