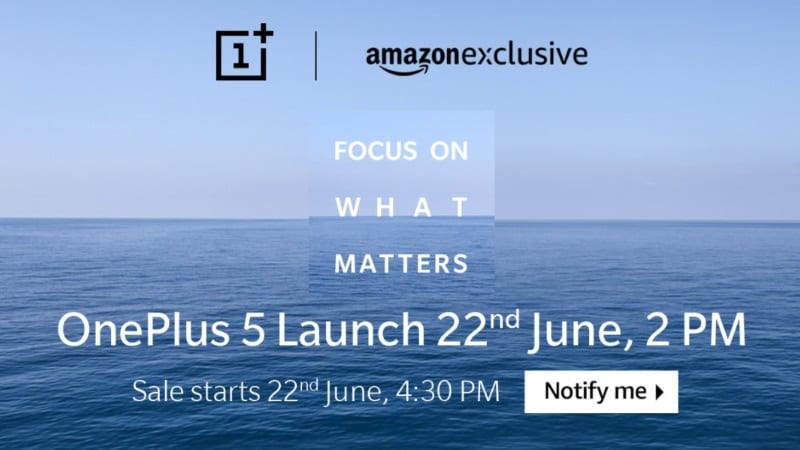 While OnePlus has already confirmed June 22 launch date for OnePlus 5 in India, Amazon India has now announced that the smartphone will be exclusively made available for purchase from the website on the very same day. More information was also gleaned from the source code of Amazon's page, revealing 8GB of RAM on the smartphone. Separately, OnePlus CEO Pete Lau has shared a night camera shot taken from OnePlus 5 to show the phone's optics in low light. Finally, OnePlus has also released a teaser video for smartphone's India launch and to remind people that it's last flagship OnePlus 3T received rave reviews from customers and critics alike.

First coming to OnePlus 5 India availability, Amazon India has announced that customers will be able to purchase the smartphone in India exclusively through the website via a sale that would start at 4:30pm IST, on the same day as the phone's India launch. Those who are interested can also apply for notifications regarding the release from the website's dedicated OnePlus 5 page. While the teaser page for the phone only mentions that OnePlus 5 features Snapdragon 835 processor, which has already been confirmed by the company, some more information has been revealed from the source code of the page.

"OnePlus 5 powered by 2.35GHz octa-core Snapdragon 835 processor and 8GB of RAM will release on 22 June 2017 as an exclusive at Amazon.in," was spotted written in the source code of the teaser page by well-known tipster Evan Blass. This line in the source code seemingly confirms that OnePlus 5 smartphone will indeed feature impressive 8GB of RAM. Notably, the flagship smartphone has been previously tipped to feature 8GB of RAM in leaks as well.

Moving on to the camera sample, OnePlus CEO Pete Lau shared a picture clicked by the OnePlus 5 in low-light conditions on Chinese micro-blogging website Weibo. The shared sample looks impressive to say the very least but the image's metadata has also revealed that the phone comes with a 16-megapixel sensor, GSMArena reports.

Finally moving on to the teaser video, shared by the company on Tuesday, the company has shared the positive feedback received by its OnePlus 3T smartphone but mentioned that with upcoming flagship, it is "aiming for 5." The numeral indicates both the 5 star rating aspiration as well is the reference for the OnePlus 5.

We will have to wait for official announcement for further information about the phone but the launch date is not too far away any more. Let us know in comments if you are excited about the upcoming OnePlus 5.