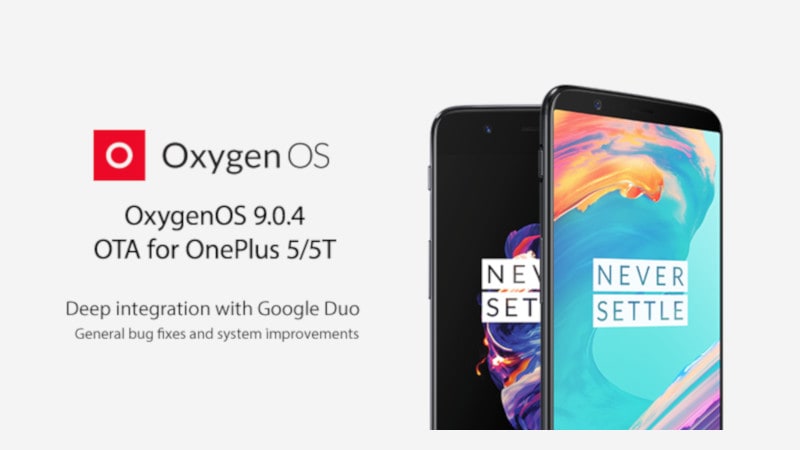 OxygenOS 9.0.4 update for the OnePlus 5 and OnePlus 5T is now rolling out over-the-air

OnePlus has released a new software update for the OnePlus 5 and OnePlus 5T smartphones. Carrying the build number OxygenOS 9.0.4, the update brings a number of changes, including the recently announced deep integration of Google Duo. According to the company, the update is being released starting today and will reach a limited number of users initially, given the incremental nature of the rollout. The broader rollout will begin over the next few days for both OnePlus 5 and OnePlus 5T.

According to a post on the official OnePlus forum, the OxygenOS 9.0.4 update for the OnePlus 5 and OnePlus 5T smartphones includes January Android security patch, improved stability for OTA upgrades, general bug fixes, and system improvements. Additionally, the update brings network stability and deep integration with Google Duo. To recall, the Google Duo integration adds the Duo video calling capabilities to Call Logs, Contacts, Dial Pad, and Messaging on the smartphones. The user reports indicate that the update is 1741MB in size.

The OxygenOS 9.0.4 update is being rolled out over-the-air (OTA) and the OnePlus 5/ 5T owners will automatically receive a notification once the update is ready for their smartphone. If you don't want to wait, you can manually look for the update by going to Settings > System > Software updates.

Meanwhile, OnePlus has also revealed that OnePlus 3 and OnePlus 3T will be getting the Android 9 Pie update soon. The update was originally supposed to arrive by the end-of-2018, but the company has taken longer than usual to release it.