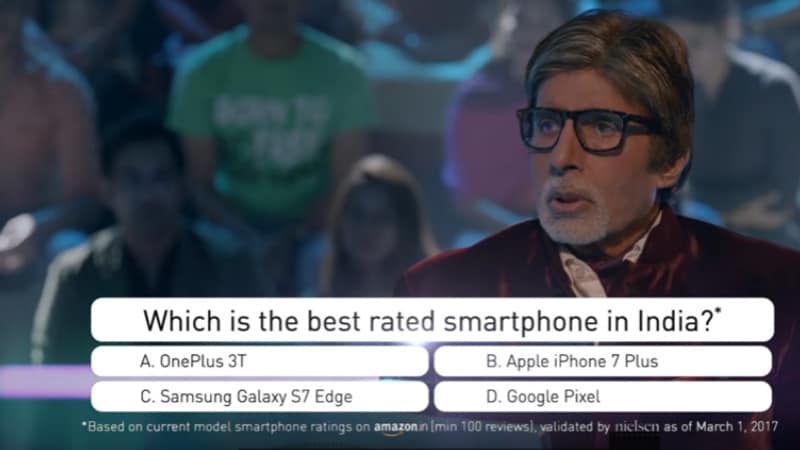 Broadcaster Sony Pictures Networks India (SPN) and OnePlus have clashed head to head over an ad campaign. SPN has filed a copyright infringement plea against the Chinese mobile manufacturer over an OnePlus 3T television advertisement that has Bollywood superstar Amitabh Bachchan in it, who was also the last host of Sony's Kaun Banega Crorepati show.

SPN claims that OnePlus has used its Kaun Banega Crorepati format for its OnePlus advertisement, calling it a breach of intellectual property. The OnePlus 3T ad has Amitabh Bachchan conducting the "Best Smartphone Contest" in a format that is arguably similar to Kaun Banega Crorepati game show, the rights of which are owned by SPN. The ad goes on to show how Bachchan, the contestant (comedian Rohan Joshi), and the crowd all agree that the smartphone is the best rated in India - with the caveat that the rating was based on "current model smartphone ratings on Amazon India." SPN confirmed to Gadgets 360 that the Delhi High Court has issued a stay on the OnePlus ad for now.

“On March 30, 2017, the Delhi High Court passed an order staying the OnePlus advertisement copying SPN’s, 'Kaun Banega Crorepati' (KBC) format. Sony Pictures Networks is recognised for its ability to create innovative content that has a vast mass appeal. But, as much as content-creation is at the core of our business, so also is the protection of our intellectual property,” the company told Gadgets 360.

OnePlus for its part has issued a boilerplate statement. "OnePlus takes intellectual property very seriously. However, as per company policy, we are unable to discuss any ongoing legal matters," a company spokesperson told Gadgets 360.

The OnePlus 3T ad has been showing up on various TV channels across India for a while now. The smartphone is the latest flagship by OnePlus featuring a Snapdragon 821 processor, and is priced starting at Rs. 29,999.

This is not the first time the Chinese manufacturer has faced the ire of the Delhi High Court, with OnePlus ordered to stop selling Cyanogen-branded OnePlus One smartphones in the country because of Micromax's exclusivity partnership with Cyanogen. The ban was lifted soon after however.

Chinese manufacturer OnePlus entered India a few years ago, and has been selling smartphones exclusively through Amazon India since then. This ad was the company’s first full-blown commercial endorsed by a movie star from India, and this stay order would put brakes on the company’s momentum in the country.