OnePlus 2 Smartphone Will Be Priced Under $450, Says CEO

OnePlus in its latest teaser on social platforms has confirmed that the pricing of the upcoming OnePlus 2 smartphone will be under $450 (approximately Rs. 28,500).

OnePlus took to Twitter and said, "We've seen price estimates for the #OnePlus2 upwards of $500." The tweet accompanied an image of the company's CEO Pete Lau quoted saying, "I can promise that the OnePlus 2 will be priced under $450." 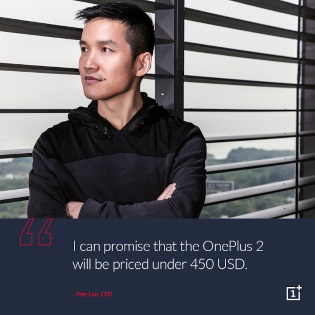 The company further stressed on the pricing of its new OnePlus 2 smartphone in a Google+ post and followed up on its teaser adding, "Honestly, it's never been about the price. We simply make the best smartphones we can, and we go from there." Considering that OnePlus One was dubbed '2014 flagship killer' for the specifications it packed in at very competitive pricing, we can expect its successor to repeat the story this year.

The company has already revealed that its second flagship smartphone, the OnePlus 2, will be launching on July 27 and the announcement will be made at a virtual reality event. The Chinese handset manufacturer until now has confirmed that the OnePlus 2 would feature Qualcomm Snapdragon 810 v2.1 SoC, USB Type-C port, and will sport a fingerprint sensor that is claimed to be faster than Apple's iPhone Touch ID sensor.