OnePlus had last week following its Black Friday open sale announced the OnePlus 2 would be available invite-free forever starting midnight Friday across the world. It turns out that date wasn't applicable for India, with the invite-free status only official from Monday. The smartphone is available exclusively via Amazon India. 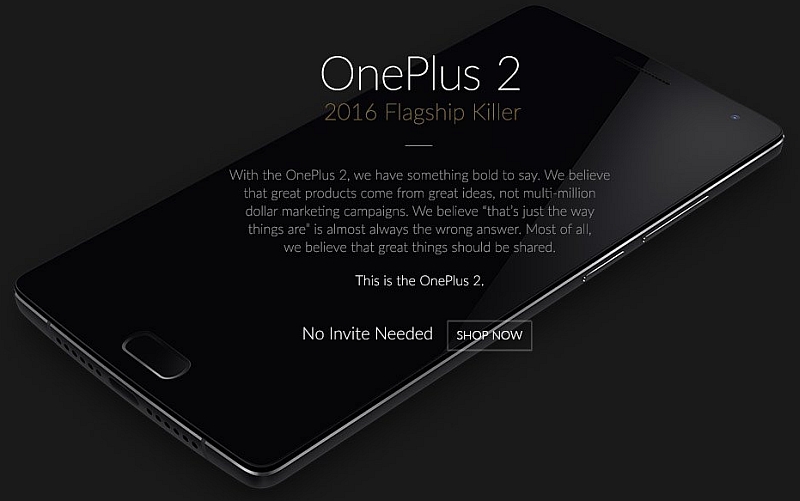 To recall, the OnePlus 2 bears the tagline "2016 flagship caller", and sports a 5.5-inch full-HD (1920x1080) display. It is powered by a 64-bit octa-coreSnapdragon 810 v2.1 SoC clocked at 1.8GHz and coupled with an Adreno 430 GPU alongside 4GB of LPDDR4 RAM and 64GB internal storage. It sports dual 4G Nano-SIM cards (dual-SIM dual standby), as well as USB Type-C connectivity (with the cable reversible at both ends).

On the photography front, the handset rocks a 13-megapixel rear-camera, and a 5-megapixel front facing shooter. The dual-SIM capable smartphone supports 4G LTE, Wi-Fi and other standard connectivity features. It runs Android-powered OxygenOS 2.0, though OxygenOS 2.1.2 is officially available as well.

To note, the OnePlus 2 has been made available via open sales (not requiring invites) in India on several occasions in the past, with the most recent being in October. OnePlus in October rolled out two smartphone coverage options in the form of B2X Service and B2X Protect for the OnePlus 2 in India.