Soon after OnePlus CEO Pete Lau teased that the firm's upcoming flagship smartphone will feature a metal build, an image of the OnePlus 2 purportedly showing the build material has emerged on the Internet. 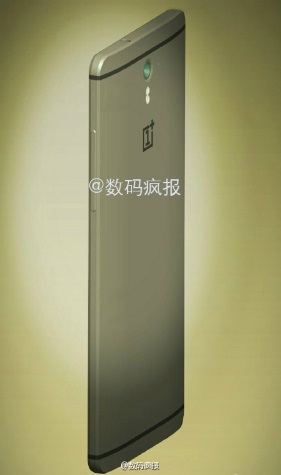 The image has been posted by a Weibo user and shows the alleged OnePlus 2 smartphone's rear panel featuring what appears to be a metal build. The image also shows the OnePlus logo on the centre of the handset's back panel alongside the primary camera with dual-LED flash. The top and bottom panel of the OnePlus 2 smartphone in the image is seen sporting plastic bands, likely for antenna reception. The right panel visible in the image also shows the volume control keys while the headphone jack is seen on top panel.

Looking at the purported image, the OnePlus 2 can be expected to be slimmer than the OnePlus One (see above), which measures 8.9mm thick.

The leaked image does not show a fingerprint sensor on the back, leaving us to assume that if the image is real the OnePlus 2 will feature its announced fingerprint sensor on the home button similar to what Apple and Samsung did with their smartphones from the iPhone 5s and Samsung Galaxy S5 onwards. Also not seen on the rear panel is a dual lens camera set up that was recently tipped.

Readers should remember that all these leaks should be taken with a pinch of salt as the render's legitimacy remains questionable.

OnePlus has already revealed that its second flagship smartphone, the OnePlus 2, will be launching on July 27 and the announcement will be made at a virtual reality event.

The Chinese handset manufacturer in recent weeks has been dropping hints about its next flagship in bits and until now the company has confirmed that the OnePlus 2 will feature Qualcomm Snapdragon 810 v2.1 SoC, USB Type-C port, and recently the company revealed that the handset will sport a fingerprint sensor that's faster than Apple's iPhone Touch ID sensor.

The exact price of the OnePlus 2 is yet to be announced, though the company earlier this month suggested the price of OnePlus 2 would definitely be higher than $322 (roughly Rs. 20,500) or CNY 1,999.

Huawei Honor 6 Receives a Price Cut, Now Available at Rs. 16,999
BSNL Launches SpeedPay Mobile Wallet: How Can You Use It?