OnePlus is scrapping the invite system for its current OnePlus 2 flagship smartphone. On Thursday, the company announced that starting this Saturday (December 5), those interested in purchasing the smartphone won't need to have an invite. In addition, the company said that it will hold a three-day open sale for the OnePlus X smartphone starting December 5.

In a blog post, company's co-founder and public face Carl Pei announced that OnePlus is pulling the invitation system that was required for the purchase of a OnePlus 2 smartphone as it celebrates its second anniversary. He further noted that the company will also be giving discounts on accessories and covers. Those with a OnePlus smartphone will get 90 percent off on all accessories for their device, he added. There's a mousepad too, that will be available in limited quantities.

"The invite system has been crucial to letting us scale our operations and has given our fans a unique way to share OnePlus with the people in their lives," writes Pei. "But we are always trying to enhance the OnePlus experience for you and taking risks to push ourselves and show real improvements. That's why we're making the OnePlus 2 invite-free... forever."

The China-based smartphone company took the world by storm last year with its OnePlus One flagship smartphone. Touted as the "flagship killer," the $350-priced (Rs. 21,999 in India) handset impressed many users and experts alike, however its invitation system turned out to be a deal breaker for many, as it made the smartphone rather difficult to get. 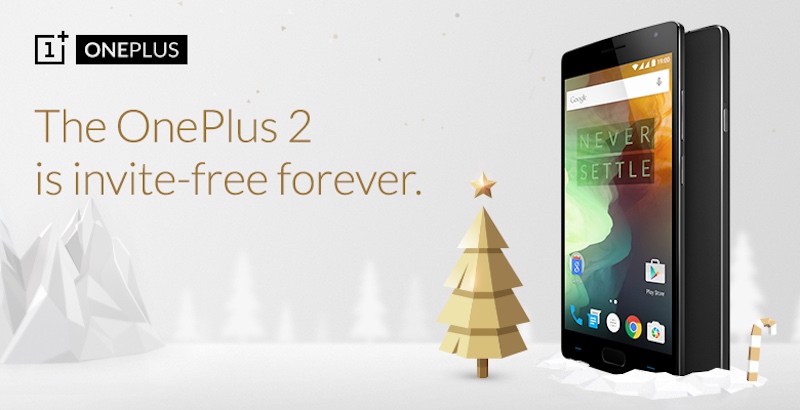 But over the past few months, the company has gotten better at handling these invitations and meeting the demands for its products. It has held several open sales this year, with the most recent sale concluding last month. The OnePlus X, which was launched in India late October at a price point of Rs.16,999 will be sold without an invitation system between December 5 to December 7.

To recall, the OnePlus 2, which the company is calling the "2016 flagship caller", sports a 5.5-inch full-HD (1920x1080) display. It is powered by Qualcomm's Snapdragon 810 octa-core SoC clocked 1.8GHz, 4GB of RAM, and 64GB of internal storage, which cannot be expanded. On the photography front, the handset rocks a 13-megapixel rear-camera, and a 5-megapixel front facing shooter. The dual-SIM capable smartphone supports 4G LTE, Wi-Fi and other standard connectivity features. It runs Android-powered OxygenOS 2.0, though OxygenOS 2.1 is officially available as well. Depending on your region, you might also soon be able to get CyanogenMod too.